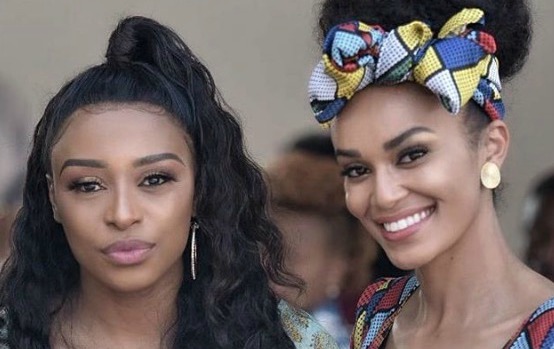 Actress and businesswoman Pearl Thusi says she and DJ Zinhle are doing just fine and has asked tweeps to stop spreading rumours that their friendship is not in a good place.

Tweeps have been speculating that her friendship with businesswoman DJ Zinhle has been over for a while since they don't appear to be close as they used to be.

The pair left many envious of their friendship when they took a bestiecation and supported each other through thick and thin. The pair's friendship took the spotlight in DJ Zinhle's reality TV show The Unexpected  and fans couldn't get enough of it.

Fast forward to 2022 and they do not post each other as much on their socials, and this has led to tweeps thinking they are no longer friends.

Taking to her Twitter timeline recently, Pearl said people need to stop fuelling a rumour that the pair were not on good terms.

“Guys - Zee and I are still very much friends. Can this nonsense stop now,” she tweeted.

Guys- Zee and I are still very much friends.
Can this nonsense stop now 🙄

In her mentions her followers were not buying the tweet, and said it was a story cooked up for the socials.

“No ngeke sizwe ngani. You guys just fixed things now when you had a gig together or whatever it is called recently. You had a birthday and she never wished you a happy birthday like all these years. Also, you were no longer liking each other's posts. Kodwa ke nzophuza amanzi ngoba ezababili,” said one tweep.

“I think you should be a fan of your friends. Unashamedly. I think you should boost and uplift them every chance you get. I think its important to let them know that not only do you love them, but you're also rooting for them. Most of the time people need to hear it.”

Pearl Thusi finally realised that being a DJ Zinhle simp isn't worth it. pic.twitter.com/lrVdYNZDwo