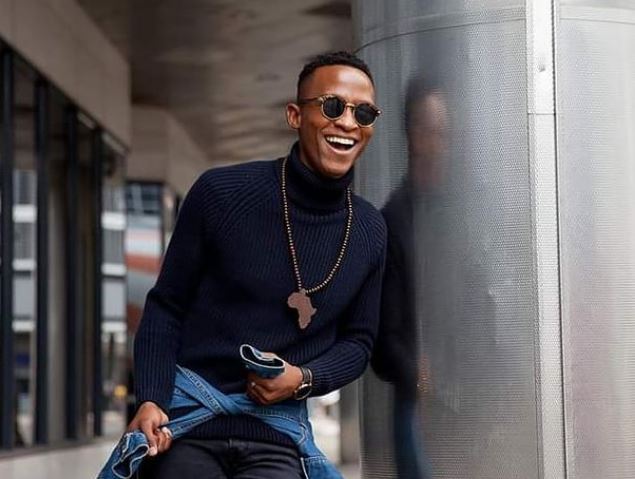 A close friend of Katlego Maboe has claimed the former Expresso presenter “is the victim” in the legal woes between him and his ex-girlfriend and mother of his son, Monique Muller.

In October 2020, a video of the pair having a heated argument over the media personality cheating on his now estranged partner Monique made its way to the net.

Katlego’s friend Volo Ganca, with Twitter handle @MximYesses, took to the social media platform earlier this week to defend him by damming the allegations made against him and calling for his return and acceptance in the entertainment business.

In the series of Twitter posts, the friend alleged Monique had threatened to take their son away from Katlego when he tried to leave their relationship.

“His partner was pregnant and threatening to leave with the child so t he could never meet him if he got on the plane to the Ukraine. The reason for the threats? She was suspicious of the nature of Katlego and @zbzoebrown’s relationship. She always has been,” he wrote.

“Kat had tried to leave his relationship before. He tried to reach out to his friends. He tried and on one occasion when he did, his partner was listening in on the conversation from the other side of the booth. Everybody who was there saw her.”

In another tweet, the friend claimed to have witnessed Monique and her family harass the entertainer, and said his team are in possession of the evidence.

For the interests of keeping things concise, because this story has many layers, I want to try & deal with what is publicly known:

After catching wind of the thread, Monique’s close friend Caldine Wyngaard could not tolerate what she described to TshisaLIVE as “blatant slander” towards Monique as their court date approaches.

Caldine went head to head with Volo on Twitter, discrediting his “truth” about the situation between the former lovers.

See her fiery responses to his thread here.

🤣 what did Kat do for me? Please man tell me? In the years that we were friends you were there once Volo! For a birthday party good-time friend. Kat might have done wonders for you but not me and I will not be silenced when someone is an abuser. You DONT KNOW WHAT HAPPENED!

Speaking to TshisaLIVE, Caldine said she couldn’t sit by and let Katlego’s friend “paint the narrative” that Monique is the bad person in the story.

“I met him (Volo) once and this was at the beginning of their relationship. He is a friend of Katlego and he can speak on behalf of whatever he thinks Kat’s character is, but for the past five years he hasn't been around much. All the times Monique and Kat were going through the difficult bits, he wasn’t there.”

Caldine said she believed Volo was being used by Katlego to influence public opinion.

“The issue at the moment, for me, is that Katlego is continuously trying to change the narrative around the story. Every single time the pair are about to go to court, he somehow finds a way to end up in the papers or viral on social media. They try to incite her [Kat] into some kind of response so they can take that to court and show her as the problem.

“No-one has spoken to Volo in years. The fact that he decided to take it upon himself to ‘clear’ Katlego’s name on Twitter  is just beyond me. A whole year later?” Caldine said.

Monique declined the opportunity to comment, citing the fear her words may be used against her in court.

Katlego and his team reserved comment, saying: “My client will not be issuing any further comments and/or statements in respect of the subject matter currently under discussion.”

Responding to TshisaLIVE’s enquiries, Volo said he’s said all he had to say in the lengthy tread he posted on Twitter.

“I’ve said much of what I needed to say in the thread.”