Trombonist’s move to East London a win all round 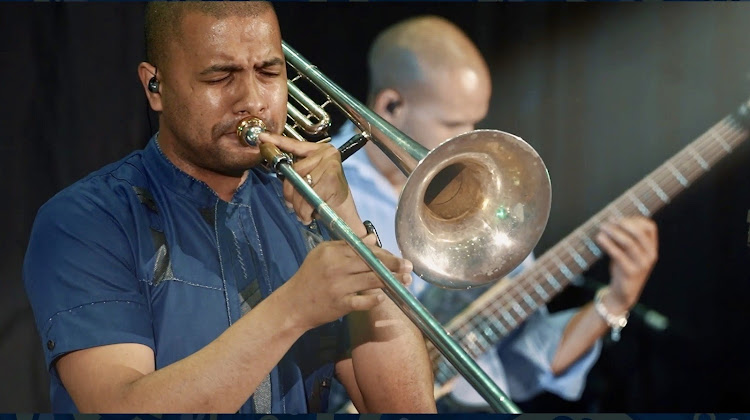 “When a post became available for me and my wife Diondra, we decided to move even though our son Kai was only one month old. We took a leap and we haven’t looked back,” Du Preez said from his new home.

Diondra works in public relations and marketing at the school, and baby Kai is now nearly six months old.

The Mandela University music alumnus is now working with Alan Webster, one of two deputy principals at Stirling and the director of the Standard Bank Jazz Festival.

“Alan is an immensely inspiring colleague,” Du Preez says of the man who has run the school’s jazz band programme for more than a quarter of a century.

Webster has been at the helm of the National Arts Festival jazz programme for almost as long, building international jazz connections over the decades.

There are other links to the National Arts Festival in the line-up for Isisusa, which features saxophone player Sisonke Xonti and Motherwell singer Andy Ndlazilwana.

All three have played in the City of Saints: Du Preez cut his teeth in youth jazz bands while still at school, Xonti is the 2020 Standard Bank Young Artist Award Winner for Jazz, while Ndlazilwana won an Ovation Award at the festival for her show with Edgar Muzah and Friends in 2018.

Xonti and Ndlazilwana also both performed in the Digital National Arts Festival in July.

“Sisonke and I actually go way back to 2006 and we’ve played in a couple of National Arts Festival shows together. He’s a musician whom I admire and respect,” Du Preez said.

He has played with several South African jazz legends on its stage, including the late Zim Ngqawana, and other SBYA winners such as Shannon Mowday.

Although known for his trombone skills, Du Preez is a versatile musician and teacher.

“My first love is trombone but I dabble on the piano and guitar, as well as all the brass instruments like trumpet and euphonium. I use the piano for writing out my music.”

For the 2020 Isisusa Jazz Fest the three featured artists — and musical director Ulagh Williams — will play only original music, some of it for the first time in public.

Due to the pandemic, the show will be online, streamed free of charge via the Mandela University YouTube channel.

Du Preez will perform his own compositions This One’s For You, Infusion and For Mom, For Dad.

“To hear these come alive was awesome. It was also a highlight to have Sisonke play on one of my tunes — I asked him to put his spell on For Mom, For Dad. ”

Du Preez jumped at the chance to take part in the digital Isisusa Jazz Fest.

“I was very excited when I heard about it as it’s a pioneering project for the university,” he said.

As Mandela University’s head of arts, culture and heritage Ryan Pillay said at the concert recording: “This is the first time in the history of the university to do something on this scale”.

Du Preez reconnected for the concert with several former bandmates from Two Tone, the musical ensemble started by Gareth and Ulagh Williams.

“I’m an educator now, so to get the opportunity to perform is very fulfilling. I love it and I prepared every single night for months, just like a professional musician would,” he said.

Covid-19 has hurt most musicians and Du Preez regrets that the “immersive live experience” and chance to mingle after a show is not possible right now.

However, he is grateful digital events do at least enable “a lot more people around the world” to tune in.