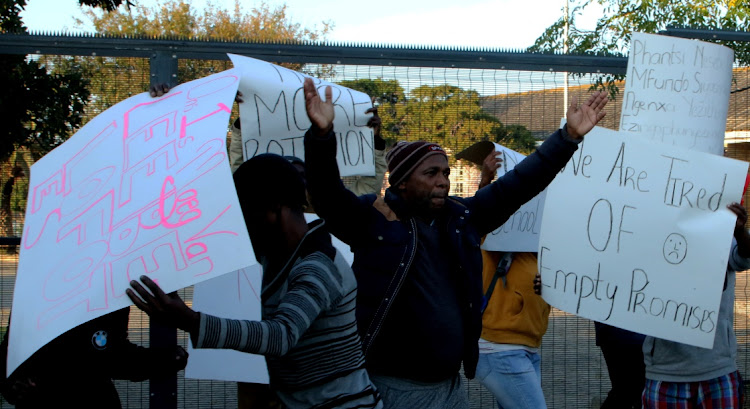 And for eight months more than 1,000 pupils have been forced to share the one remaining ablution facility.

Pupils have been attending school on a rotational basis since March, with boys one day and girls the next, but the rotation has had a negative effect as the academic performance has dropped, with pupils falling behind on the syllabus.

And now the parents of the 1,120 pupils have had enough.

This week the frustrated parents, led by school governing body (SGB) members, shut the doors to the ailing school, barring pupils and teachers from entering the premises until the department of education intervenes.

“We are not protesting because we have nothing to do or because we are enjoying this,” he said.

“This is a worry and a strain for teachers and pupils.

“We can’t have more than 1,000 pupils sharing just one ablution block.”

Only one toilet block for 1,120 pupils

Concerned parent Bianca Tomes, 34, said there was a ripple effect to schooling on a rotational basis — from children who relied on the school feeding scheme for their daily meals to parents who were unable to pay people to look after their children.

“Every day you will find children wandering around the streets.

“The rotation also causes them to be lazy to do homework because they know they are not going to school the next day.”

Education department spokesperson Nyameka Tokwe said the incident had been reported to the district director.

She said an infrastructure team at the provincial office was also meeting to discuss the matter.

But how, after eight months, are they still discussing the matter?

Surely this should have been dealt with as a matter of urgency?

The indignity of sharing an ablution with so many others aside, there are the obvious hygiene concerns — particularly while we are still in a pandemic.

The officials who think it is OK to still be discussing the matter after eight months should do themselves a favour — and do right by the Sapphire Road pupils — and ask themselves if they would allow their own children to share toilets with more than 1,000 other children.