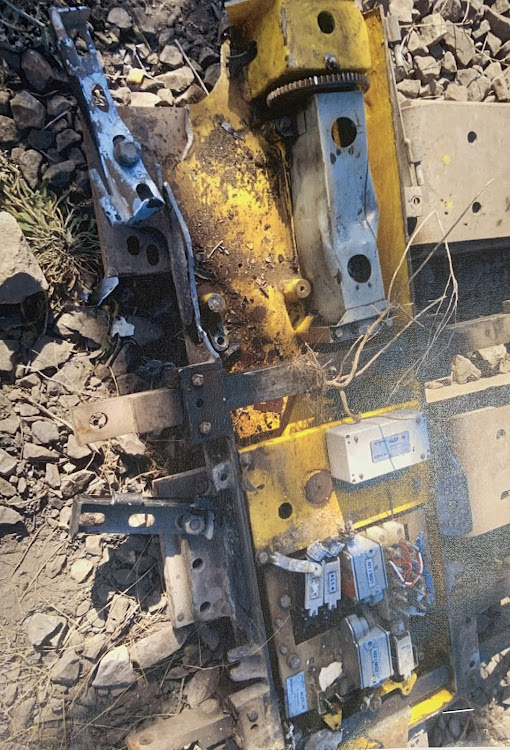 HUGE COST: The railway tracks point machine that was damaged by Mtose Mdoda, who was sentenced to 12 years behind bars on Thursday.
Image: Supplied

Sibiya on Thursday sentenced Mtose Mdoda, 26, to 12 years’ imprisonment after he was spotted in broad daylight damaging a railway tracks point machine next to Old Grahamstown Road on July 12.

Sibiya said Mdoda would have received R100 if he managed to sell the copper, a fraction of the R125,000 price tag on the mechanism used to direct trains.

Meanwhile, the damage caused took over a week to repair, causing great inconvenience.

The inconvenience caused to commuters and the additional costs incurred by Transnet to replace and repair the damage were taken into consideration as aggravating circumstances while determining an appropriate sentence, Sibiya said.

Commenting on social media, several users welcomed the sentence, saying such acts were serious and should be treated and sentenced as such.

Kate Lovemore Fowler wrote on Facebook: “This is TREASON. They need to arrest all perpetrators, whether they are stealing, breaking or vandalising, and sentence accordingly.”

Vincent Botha wrote: “Tampering, damaging, stealing essential infrastructure should be classified as sabotage, a terrorist act, and be dealt with accordingly. No mitigating factors or first offence leniency must be given or accepted.”

Any attack on infrastructure is an attack on the state, a war against one’s own people.

The obvious inconvenience to those affected when essential infrastructure is tampered with aside, there is also the possibility of loss of life.

We have often read about people, including young children, being electrocuted by illegal connections for example.

We have seen the effects of tampering with any essential infrastructure.

Just recently, large parts of Nelson Mandela Bay were left without water after an air valve on the Motherwell-Chelsea pipeline was vandalised.

In a video circulating on social media, water we cannot afford to waste as parts of the metro edge closer to being with dry taps within a matter of weeks is seen shooting high into the air from the breakage point.

We hope this sentence — and some reflection on the impact of vandalism on essential infrastructure — deters those even thinking about vandalising infrastructure crucial to keeping our country working.