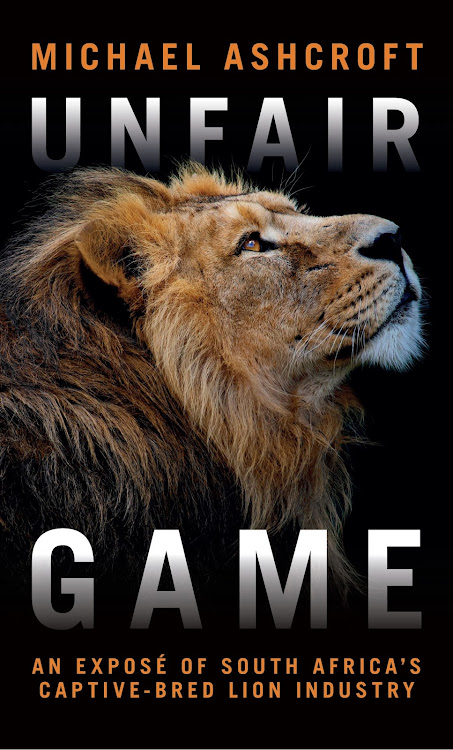 “Something has gone terribly wrong in a country which I love. I am determined that it must be put right.” Michael Ashcroft’s latest book, Unfair Game, exposes the worst of SA’s macabre captive-breeding lion industry as a high-profile investigation implicates top-tier  authorities, tourist hotspots and border-crossing criminals smuggling lion cubs

SA’s captive-bred lion industry will likely go down in history as one of the most shameful wildlife disasters created by humans.

While it continues to spiral into an increasingly corrupt trade, it drags down with it the country’s credibility as a reputable wildlife tourism destination.

It documents an extensive undercover operation by ex-British Army and security services personnel.

The team recruited an SA dealer as a double agent and planted tracking devices in lion skulls destined to be sold to Asia.

Eight months later, their findings confirm many rumoured horrors of SA’s lion industry, including the alleged deboning of live lions in Asia to obtain sought-after ‘pink bone’ caused by blood left in the bone.

It details how wild lion cubs are being caught in Botswana and smuggled into SA for petting and to boost gene pools, and how illegal wildlife trade is conducted openly at a public market in Johannesburg, where lion skulls and skins are sold alongside skins from endangered pangolins.

The book also details the smuggling of captive lion and tiger skins.

It highlights what appears to be a concerning lack of interest by the police to investigate these matters, describing how Ashcroft’s team meets up with SAPS commanders in charge of the wildlife unit in Pretoria, to present incriminating evidence uncovered during the extensive investigation.

Instead of acting on the information, or even looking at the document, the book claims SAPS officials rejected the evidence and threatened the whistle-blowers with imprisonment.

According to Blood Lions director Ian Michler, the investigation blows to shreds the perception that the department of environment, forestry & fisheries (DEFF) is a well-regulated and enforced industry.

“The evidence strongly suggests that SA authorities are enabling this incredibly dangerous trade.

“Global and local opposition to it is widespread.

“It comes from the conservation and scientific community, our tourism industry and many hunting organisations around the world, and still we have not seen a single act of legislation to curb or end these activities.”

DEFF’s insistence that “there are presently no major threats to our wild lion population” is contradicted in Unfair Game as the book details how undercover investigators allegedly joined poachers planning to kill wild lions in Kgalagadi Transfrontier Park.

The wild lions were to be poisoned or shot in the stomach to ensure their bones remained undamaged, the book claims.

Wild cubs, too, are kidnapped during such poaching excursions, the team learnt, to be smuggled to SA for petting and to boost the gene pools of SA’s captive breeders.

Instead, a generic response was sent, saying that no comments could be made on any issues relating to SA’s lions until the newly formed High-Level Panel had formulated its strategy.

DEFF spokesperson Albi Modise later confirmed that minister Barbara Creecy had “invited Lord Ashcroft to submit his book and any other evidence he thinks relevant to the panel”.

Presented by Lord Ashcroft KCMG PC, to accompany his new book "Unfair Game", this film discloses details of a second major investigation into captive-lion breeding, whereby thousands of Africa's most iconic animals are killed either for the bone trade or as hunting trophies. Visit http://www.LordAshcroftWildlife.com for more information and to order the book. Follow Lord Ashcroft on Twitter and/ or Facebook: @LordAshcroft