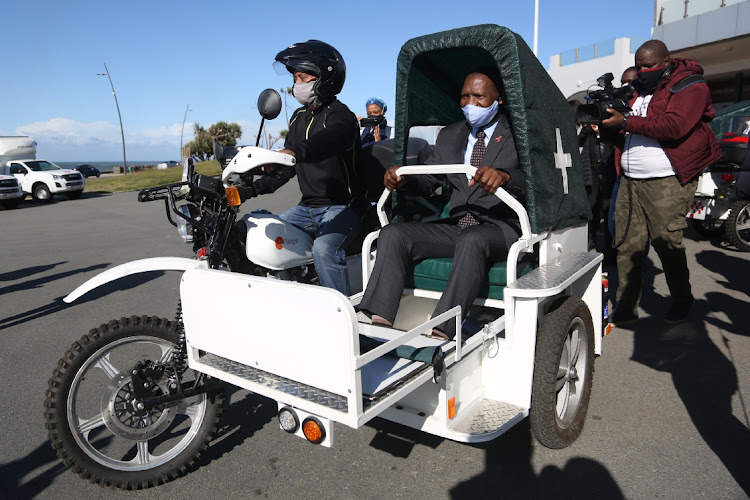 Health Minister Dr. Zweli Mkhize going for ride on one of the e-ranger motorcycles in East London on Friday
Image: MARK ANDREWS

The Eastern Cape government has sounded the alarm over the escalation of attacks on ambulance crews, particularly in the “hotspot” of Port Elizabeth.

“Our ambulance crews have been under siege for some time from criminals who have targeted them,” health MEC  Sindiswa Gomba said on Friday.

“That has to end because when ambulance crews are attacked and robbed, that will disadvantage the whole community, as no-one will willingly go to hotspot areas.

“As communities we have to call thugs out and report them to law enforcement agencies so that our EMS crews can continue doing what they do best, which is taking services to the people and saving lives.

“We cannot have a situation where we have no-go areas. That is unacceptable.

“Those attacking EMS crews are our bothers, sisters and neighbours and we need to stop burying our heads in the sand, but speak up when we witness such attacks.”

Gomba, who was accompanied by health minister Zweli Mkhize, was speaking in East London at an event to mark the launch of 100 motorcycle ambulances in the province.

The specialised vehicles are equipped with a sidecar, complete with covered canopy and a stretcher to transport patients.

Manufactured by King William’s Town firm TFM Manufacturing, the mobile units will be rolled out mainly in rural areas that are inaccessible to conventional ambulances because of bad roads.

Mkhize, who was on a two-day visit to the Eastern Cape to assess the health department’s  response to the Covid-19 pandemic, said the motorcycle ambulances, which were being piloted in the province, could be rolled out in rural areas in other parts of SA.

He said the vehicles, which could manoeuvre in difficult terrain, would assist in the provision of decent health services in rural areas well after the pandemic had been contained.

“These attacks just do not makes sense, especially in the Port Elizabeth area.

“Just last week, we had an ambulance shot at in that area.

“We also had an ambulance practitioner stabbed and this cannot be tolerated,” Kupelo said.

On Friday last week, emergency services workers in Nelson Mandela Bay downed tools after an attack on ambulance crew in Walmer Township, during which one crew member was stabbed in the chest.

Kupelo said there had been “isolated” attacks in other parts of the province, “but in Port Elizabeth we have a serious crisis when it comes to ambulance attacks”.

“These attacks comes in different ways. Sometimes we will get hoax calls and when we respond, we get attacked.

“We lost two ambulances that were burnt a few months ago, and last year, while our staff members were busy loading a patient who had been shot, they too were shot at and sustained injuries.

“They get robbed of their belongings.

“They get traumatised in the process and we have to put them on leave and organise psychological treatment for some of them.

“Because of that anxiety and fear, they would also down tools.

“Sometimes we have to go to police and request escorts, and that is not enough as police also do not have enough resources to escort each and every emergency call that goes out,” Kupelo said.