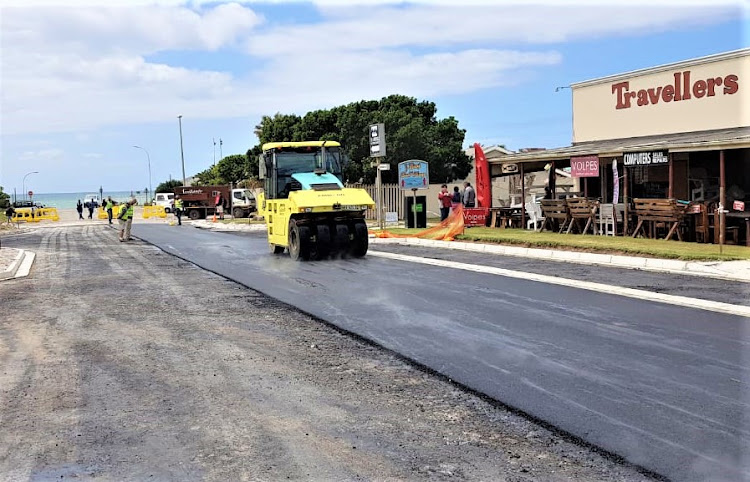 The country’s first plastic road has been officially opened in Jeffreys Bay and could result in an international plastic road company setting up a factory in SA.

The ribbon-cutting ceremony at the opening of Woltemade Street in Jeffreys Bay took place on Friday after the road’s completion  — which took less than three months.

About 1.5 tons  of plastic, which is comparable to 1.8-million plastic bags, was used to make just 1km of road.

Hendricks agreed to the project when Scottish manufacturer MacRebur and Port Elizabeth-based companies SP Excel and Scribante came on board.

The spin-off business to the project could see MacRebur open a factory in SA in a bid to build more such environmentally friendly roads.

The 300m strip of Woltemade Street was relayered with plastic-infused tar and a further section of Koraal Street will follow.

By the end of the project both streets would have used three-million plastic bags.

“The result is a road that is more durable and also friendlier to the environment,” Hendricks said at the opening.

“The plastic was turned into pellets using a special formula and then added to the asphalt mix used for the top layer of the road.”

Hendricks said this innovative approach to road-building reduced the amount of bitumen required for the asphalt mix.

“Bitumen is a fossil fuel and its extraction and use accelerate climate change.

“The plastic pellets replace a portion of the bitumen, thereby minimising harm to the atmosphere,” he said.

“Plastic is another major contributor to climate change in addition to the damage it does to our oceans.

“One of the big challenges is how to get rid of waste plastic without dangerous toxins being released.

“This technology could prove to be the answer as tests have shown it prevents the plastic from leaching as it degrades.”

The project was born in 2017 with a motion from the DA to test the feasibility of the plastic road-building technique which is already used in the Netherlands, Canada, Australia and Scotland.

The motion was rejected by the majority of the legislature, leading to DA Shadow MEC for Co-operative Governance and Traditional Affairs, Vicky Knoetze, taking the proposal to the DA-led Kouga municipality.

The opening comes in the wake of EU leaders meeting in Brussels to discuss issues including climate change.

MacRebur, a Scottish owned plastic pellet company, has since been investigating setting up a factory in SA.

“We would like to see the plant being built in Kouga.

“Not only will this create much-needed jobs, it will also be an opportunity for our communities to make money by collecting and selling waste plastic,” Hendricks said.

SP Excel and Scribante Construction, which  assisted with building the road, did so at no cost to the municipality.

SP Excel site manager Ruendell Plaatjies said he was proud and excited to be part of such a project.

“It is such a great project and so nice to be part of a team leading the way forward into the future,” he said.

“The fact is that these roads are more flexible and durable which means less wear and tear that will result in fewer potholes.”

Plaatjies said some of the materials used had been  imported from Scotland.

“We are hoping a factory can be established here so our local plastic products in SA can be recycled and converted into the final product — a road.

“The material is more user-friendly and the actual laying of it is also much more effective, saving time and money.”