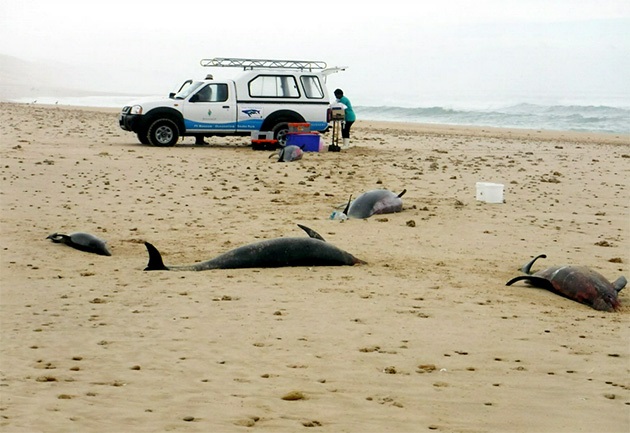 Of the 14 deep-sea mammals, known as common dolphins, found lying on the beach on Tuesday morning, four were rescued and placed back in the sea by a group of five quick-thinking zoology students from Nelson Mandela University.

Due to the condition of the dolphins, experts suspect that the mass stranding occurred sometime on Monday.

Last year in March, 38 dolphin carcasses were found scattered along the Sundays River coastline – only 10km from where this week’s stranding occurred.

This marks the sixth reported stranding on the same stretch of beach over the past 40 years. In March 2000, 28 common dolphins beached around the same spot.

Usually when you see strandings you are too late. At least this time we were able to help a few of them.

Zoology PhD student Eugin Bornman said they had gone to the secluded beach to collect fish samples at the Woody Cape Nature Reserve, which forms part of the Addo Elephant National Park.

“While we were driving we came across the dolphins washed up on the beach. It was a sight and some of them were squealing. We stopped and got out to assist,” he said.

“By the time we found them, the seagulls had already pecked some of their eyes out and started to eat them.

“We ran to all the dolphins who were scattered around and assessed all of them, of which four were alive.

“We then grabbed our buckets from the vehicle and ran into the seawater to get water to put over them. By that stage we had decided to break off into groups of two and carry the live dolphins into the water.”

Bornman said that while the dolphins were heavy, two of them managed to pick them up and carry them down to the water – into the shallow surf.

“When they were in the water, you could tell that they were weak and struggling. We stood in the shallows with them for about five to 10 minutes making sure that they did not go belly up or take in water. Eventually, they managed to break free and swim off.”

Asked about the experience, Bornman said that it was a “special moment”.

“Usually when you see strandings you are too late. At least this time we were able to help a few of them.”

Bornman said that due to bad cellphone reception, it had proved difficult to call for assistance. However, eventually they managed to get signal and sound the alarm.

SANParks spokeswoman Fayroush Ludick said the area where the stranding took place was very isolated and about 31km from the Sundays River Mouth in the direction of the Woody Cape Nature Reserve.

“A team of our marine rangers were immediately dispatched to the scene to investigate further,” she said.
Ludick said they had placed their rangers on high alert in case the four dolphins which were returned to the sea beached again or another pod stranded.

Bayworld marine biologist Dr Greg Hofmeyr went to the stranded dolphins on Wednesday and Thursday to do a postmortem on the carcasses.

Hofmeyr said the reason for mass strandings of dolphins and whales was unknown but highlighted that the shoreline between Sundays River and Woody Cape shared characteristics of other known mass stranding locations in other parts of the world.

“These are offshore dolphins and it is possible that they are unable to navigate successfully in certain inshore environments. They ‘ see’ by echo location and maybe signals from a coastline like the one near Woody Cape are confusing. One animal may go to close to the beach and become stranded. And due their strong social bonds others may attempt to assist and soon 14 dolphins are ashore.”

With regard to last year’s strandings, Hofmeyr said that this time of year was the very start of the sardine run.

“One theory is that these dolphins are coming into the bay to take advantage of schools of these fish. This could explain why these strandings are taking place around this time of year.”

Hofmeyr said Bayworld had documented six such mass strandings on this section of coastline, with the first reported in 1977. The last four incidents took place over the past 11 years.

“These are the ones we know about. It is possible that there were more but because it is such an isolated stretch of beach, no one would have seen them or reported them.”

Of the 10 dead dolphins, Hofmeyr and his team from Bayworld dissected eight.

“We took samples to analyse for diseases as part of a research programme. From my observations, however, I could not see any obvious signs of illness or injury.

“The other two carcasses were taken to Bayworld for autopsy at a later stage. Of the 10 carcasses, eight were adult dolphins and two were juveniles.”

Asked about the seagulls eating the eyes of the dolphins, Hofmeyr said it was the only accessible part to the gulls since the rest of the animal was protected by a layer of blubber.

It was common for the eyes of carcasses to be removed but this was the first time he had heard of eyes being removed from live animals.

“Despite several only having one eye, they apparently managed to swim out to sea and have not yet been found stranded again.”

Hofmeyr said his team was on standby should strandings be reported or the rescued dolphins strand again.

“Dolphins can be unnecessarily injured during rescue . . . They will often wash ashore again in a couple of days.”

Anyone who finds a marine mammal is urged to contact Bayworld’s emergency stranding line on 071-724-2122. 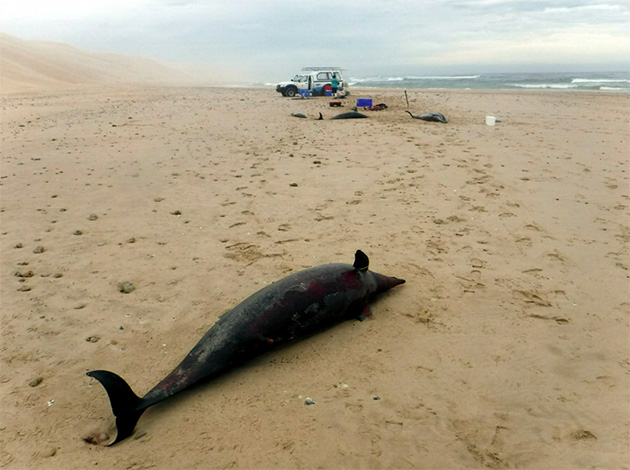