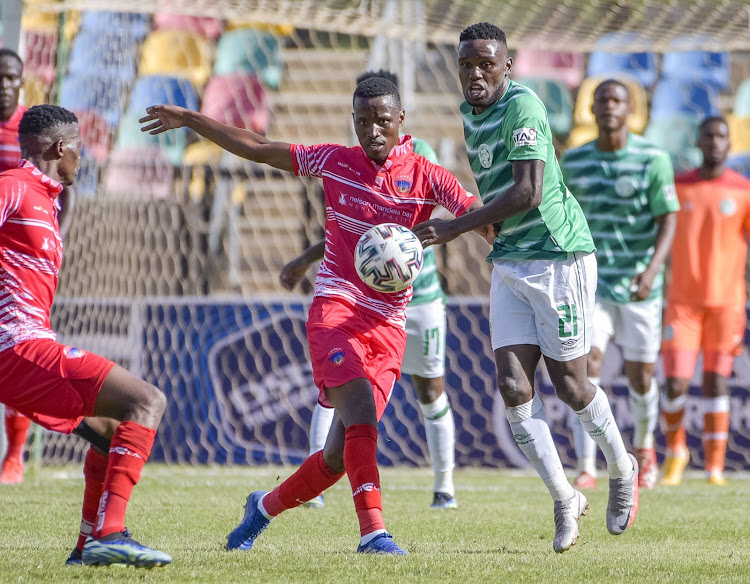 Chippa United coach Dan “Dance” Malesela expected more than what his team delivered in their 1-1 draw with Bloemfontein Celtic in their DStv Premiership match at Dr Petrus Molemela Stadium on Saturday.

However, he was happy with the point away from home.

Siwelele played most of the game with a man less after a Tshepo Rikhotso red card on the cusp of halftime.

Victor Letsoalo opened the scoring for the hosts from the penalty spot before Bienvenu Eva Nga’s second-half equaliser.

The point saw Chippa remain 13th on the league standings, five points above the relegation zone.

“We let go of a chance to get three points but you don’t want to be selfish again and not appreciate the point that we got away, ” Malesela said.

“They were one man down and we probably could have done better to break them up.

“I think we adhered to the instruction of going around the wingers and trying to get balls in because they were very compacted in the middle.

“Once we did that we got the equaliser but it’s just that we didn’t continue doing that.

“If we had continued doing that we probably could have hurt them.”

The coach said the other critical point was the penalty the Chilli Boys conceded.

“As much as it seemed very soft I think our player could have avoided contact because the man was not going to be a threat but these are things the players must learn.

“I don’t think they threatened us that much to have been worried but we should learn to play against 10 people like we did against Black Leopards.

“We didn’t give them time to breath and we moved the ball quicker.

“I hope next time we will do better.”

Malesela also complained about the condition of the pitch.

“I get worried about football.

“It’s not about Chippa United playing but it’s about the quality of football.

“You play that match and then after you go home and watch SuperSport and Cape Town City and they play on a great surface.

“We cannot advertise football properly and display good football to potential investors in football if we are going to play on a very bad pitch,” the coach said.

Thamsanqa Gabuza provided the desired impact off the bench for Matsatsanta, who duly moved within two points of league leaders Mamelodi Sundowns. .

City remain in sixth after a second straight defeat, 10 points off top spot.

Gamphani Lungu opened the scoring for SuperSport in the 23rd minute.

Evans Rusike eased past Terrence Mashego, who seemed hesitant to tackle the Zimbabwean forward, and after bursting into the area found Lungu, who bundled the ball home from close range.

City came close to pulling level on the cusp of halftime as Craig Martin teed up Mduduzi Mdantsane, but the attacking midfielder curled his left-footed shot inches wide of goal.

The Citizens found their goal two minutes after the break.

Surprise Ralani turned Keenan Phillips inside-out before watching his powerful effort canon off the crossbar, Ronwen Williams’s leg and into the back of the net.

Taariq Fielies kept the teams at level-pegging with a superb goal line clearance to deny Bradley Grobler in the 75th minute but Matsatsantsa would not be denied five minutes later.

A long ball forward from Williams caught City napping and Gabuza pounced, rising above Keanu Cupido to nod home for his sixth goal of the season. — Additional reporting by SuperSport.com