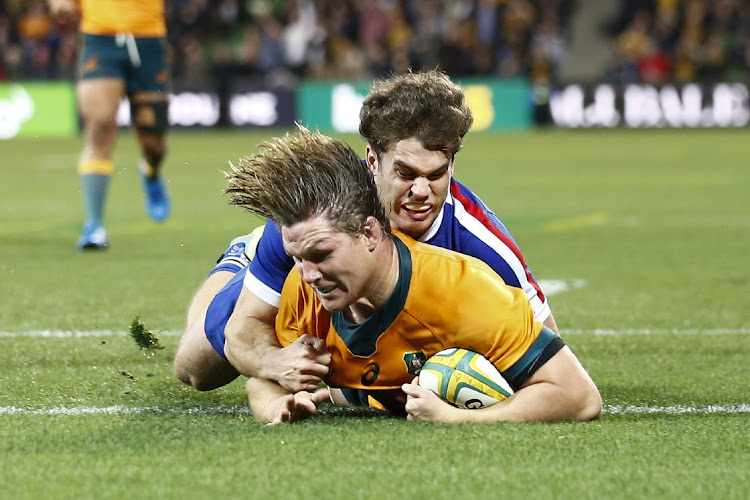 Michael Hooper of the Wallabies scores a try during the Test against France at AAMI Park on July 13, 2021 in Melbourne
Image: Daniel Pockett/Getty Images

Gloomy faces drifted around the Australia camp on Wednesday as Dave Rennie's side pondered how to turn things around in four days after the humbling defeat to an understrength France in Melbourne.

The Wallabies came close to stealing a second successive test against the French at the Rectangular Stadium on Tuesday but crumbled in the final minutes, falling 28-26 after taking another thrashing at the breakdown.

"We sort of hurt ourselves by either turning the ball over or knocking on, giving away a penalty, so a lot of good points were just undone by unforced errors," downcast Wallabies fullback Tom Banks told reporters.

"We'll have to look at that review and things we can do better but yeah, this one's on us."

Australia will be grateful to play Saturday's decider back at Brisbane's Lang Park, where they snatched a 23-21 win in the series-opener and have built an eight-match winning streak.

But Fabien Galthie's men will return to Brisbane with huge confidence after ending a 31-year losing streak away to the Wallabies, despite playing without many test regulars.

The result was another grim reminder of Australia's decline since the 2015 World Cup, having once dominated touring northern hemisphere sides.

Long-standing records have been shattered one by one in recent years, with Ireland in 2018 securing their first series win in Australia in 39 years, two years after Eddie Jones's England completed their first ever series win Down Under with a three-test whitewash.

Losing on Saturday to the French, who had to leave many of their best home due to scheduling and COVID-19 constraints, would be a major setback in the second year of Rennie's rebuild with next month's Bledisloe Cup opener looming against the All Blacks.

Having stuck with the same matchday 23 in Melbourne, Rennie will make changes and may be tempted to rush back flyhalf James O'Connor from a neck injury.

Yet there are few experienced players to reinforce exhausted stalwarts like captain Michael Hooper, whose late try and unwavering commitment kept the Wallabies in the game until the final minutes.

"We want to see a response from those new guys coming in -- they will be fresh and full of beans and give us some key energy," said Rennie.

Australia would have appeared to lack none of those qualities in Melbourne, where they scored two tries to one, dominated possession and repeatedly punched holes in the French lines.

But it was at the breakdown where they were found wanting, conceding six of their 12 turnovers at rucks to be thwarted repeatedly on attack, a repeat of their struggles in Brisbane.

Some more energy might also have been useful for the final scrum, which crumbled on the side of inexperienced prop Angus Bell, allowing France fullback Melvyn Jaminet to kick the winning penalty.

"But you know, forget fast and move on pretty quick because the decider is in four days."