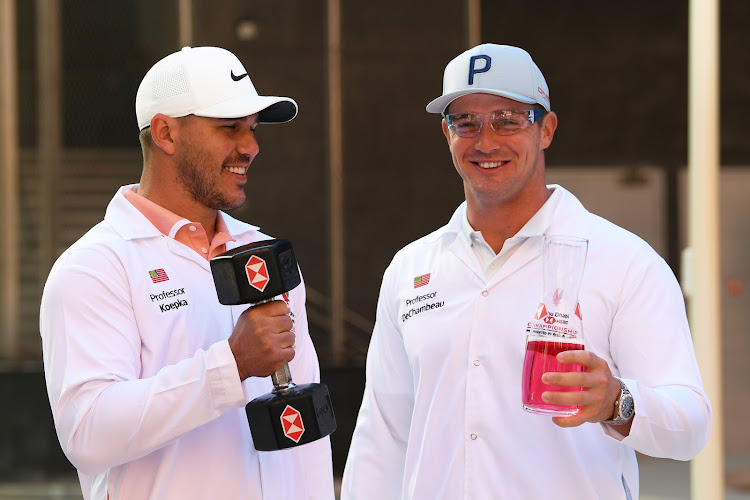 DeChambeau thinks a Ryder Cup pairing with his rival would be "funny" and a potential advantage over their opponents.

The latest round of barbs began when Koepka once again addressed questions about his distaste for DeChambeau during his pre-tournament press conference at the Open Championship at Royal St George's in Sandwich, England.

Koepka explained that DeChambeau didn't appreciate it when Koepka mentioned him as a slow player during a discussion at the 2019 Northern Trust. They had a man-to-man conversation about it on the practice green at Liberty National in Jersey City, New Jersey.

In Koepka's view, DeChambeau reneged on that agreement during a Twitch stream in which he was playing video games and mocked Koepka for his physique and his participation in ESPN The Magazine's Body Issue.

"So then he decided I guess he was going on that little, whatever, playing video games online or whatever and brought my name up and said a few things, so now it's fair game," Koepka said.

Koepka also disagreed with the notion that their feud could be harmful if and when they end up on the US Ryder Cup team together later this year.

"It's only a week," Koepka said. "I mean, look, I can put it aside for business. If we're going to be on the same team, I can deal with anybody in the world for a week. I'm not playing with him. I'm pretty sure we're not going to be paired together, put it that way. I think it's kind of obvious."

During his press conference later Tuesday, DeChambeau responded by saying he would have no issue being paired with Koepka for a Ryder Cup match.

"Oh, no, not at all. I think would be kind of funny actually," DeChambeau said. "I think we'd do well, to be honest. It would create a little interesting vibe for the team or for the guys we're playing against."

He added he didn't know what Koepka was talking about in terms of not upholding a verbal agreement from 2019.

"Maybe that's on me. Maybe I didn't," DeChambeau said. "I really don't remember anything about that. We just had a conversation that I really don't know what happened, because we haven't really bantered back and forth until now, so it's like, why is that happening now?"

Koepka has four major titles to his name versus DeChambeau's one, though DeChambeau's triumph at the 2020 US Open is the most recent.

Neither of them have won the Open Championship - and golf fans won't get to see them paired together in the first two rounds. DeChambeau will play with Jordan Spieth and South Africa's Branden Grace, while Koepka will be with Jason Kokrak and South Africa's Garrick Higgo.

The possibility exists at each event that Koepka and DeChambeau would be paired together for the third or fourth round based on their standing on the leaderboard.

"I would enjoy it," Koepka said. "I'll be close to the final group come Sunday. I always feel like I play well in the big events, the majors. I think it would be a lot more people tuning in, with everything that's gone on over the last two years, something like that, three years.

"So yeah, I think there would be a lot of people tuning in."