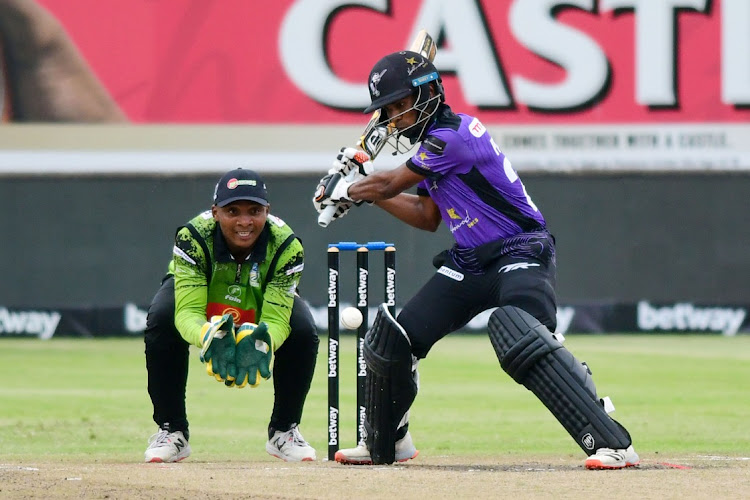 A record 92-run opening partnership by Sarel Erwee and Keegan Peterson helped the Dolphins secure a third consecutive win in the Betway T20 Challenge when they beat the Warriors at Kingsmead in Durban on Sunday.

Chasing 144 for victory, the Dolphins won by three runs on the Duckworth-Lewis-Stern method, losing only two wickets in their 18 overs.

Peterson and Erwee played some steady cricket as they amassed 37 runs in the first six overs.

The Warriors handed Erwee a second life when his attempted reverse sweep was grassed by Lesiba Ngoepe off the first ball of the eighth over bowled by Lizo Makhosi.

The left-handed Erwee took the partnership to 53 with a six on the penultimate ball of the eighth over.

The competition’s record partnership finally came to an end when Erwee chipped an Ayabulela Gqamane delivery to debutant Tristan Stubbs, scoring 52 off 37 with two boundaries and four sixes.

Bringing up the 100 in the 14th over with a Peterson single, the Dolphins kept the scoreboard ticking over as the Warriors continued to search for wickets.

Senuran Muthusamy was run out having made six off the seven balls he faced, but the KwaZulu-Natal side were still in the ascendancy.

Peterson was on 58 off 56, which included three boundaries and a six, with David Miller on six, when rain brought a halt to play with the Dolphins on 128 for the loss of two wickets, three runs ahead of the DLS method par score of 125 after 18 overs.

Earlier, the Eastern Cape side moved along to 22 before Gihahn Gloete, who struggled to find the middle of the bat, made five runs off 14 balls before being bowled by the evergreen Robbie Frylinck.

Marco Marais, batting at the top of the order, faced 21 balls for his 18 runs before he was caught by Baartman off right-arm fast bowler Kerwin Mungroo.

The Warriors lost their third wicket at the start of the ninth over when Lesiba Ngoepe top edged a short delivery back to fast bowler Ottniel Baartman, adding 19 runs including two boundaries and a six with the score on 47 for 3.

Jon-Jon Smuts and captain Sinethemba Qeshile posted a 72-run fourth-wicket stand before former Warriors skipper Smuts fell victim to a bullet throw from Baartman from the boundary to send him back to the dugout for 29 off 25 balls including four boundaries.

Gqamane made five before he too was dismissed as Baartman claimed his second wicket of the innings, the catch comfortably taken by Keshav Maharaj running in from the fence.

Qeshile ended the innings unbeaten on 47 off 38 balls including five boundaries as Stubbs smacked his first ball in franchise T20 cricket for six to end on 10.

Baartman was the pick of the Dolphins bowlers, finishing with two wickets for 31 runs in his four overs and Frylinck and Mungroo took one each.

The Warriors play the first of three matches on consecutive days when they face the Cape Cobras in Durban at 10am on Tuesday.