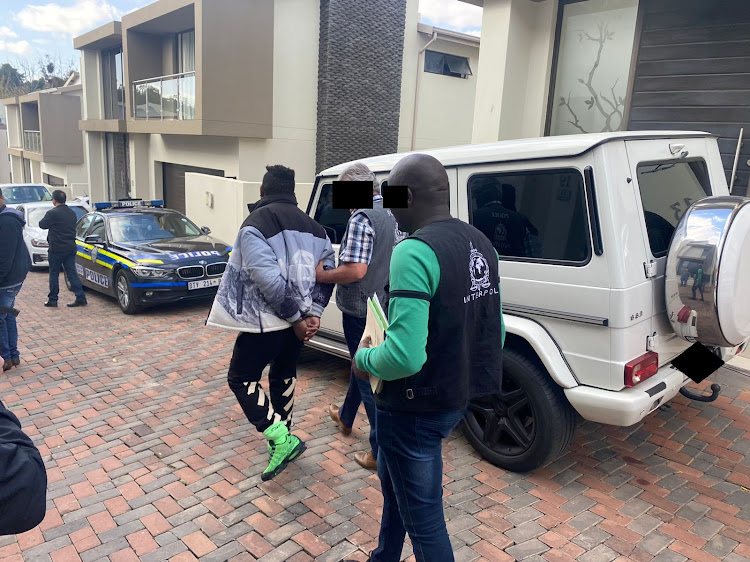 The alleged cybercrime kingpin walks past his Mercedes-Benz G63 luxury SUV as he is taken into custody by Interpol officers.
Image: Supplied

US authorities have applied for the extradition of alleged cybercrime kingpin James Aliyu, who was arrested in connection with almost R196m in alleged romance scamming and business email compromise fraud.

Police confirmed the investigation originated in the US, where most of Aliyu’s alleged victims are based.

The 28-year-old Nigerian was arrested by Interpol SA at a luxury Sandton, Johannesburg, estate on Wednesday.

Mathe said the cybercrime suspect, who has been conducting his alleged criminal activities from SA, is accused of swindling dozens of US citizens out of millions of dollars through email and text messages.

His modus operandi was romance scams through dating sites. Aliyu would allegedly become romantically involved with his victims, then swindle them. Most were women.

She said his arrest followed a widespread investigation involving law-enforcement authorities from SA and the US.

“Just after 10am on Wednesday, June 29, members from the Interpol National Crime Bureau (NCB) in Pretoria, with assistance from members of the SAPS Gauteng Highway Patrol Unit swooped in on the upmarket estate where they effected the arrest,” she said.

Aliyu appeared in the Randburg magistrate’s court on the day of his arrest and the matter has been postponed to Tuesday.

TimesLIVE reported that Aliyu was well known in SA social circles and on Instagram due to his lavish holidays and excessive spending on luxury items for himself and his girlfriend.

According to law-enforcement sources, he was arrested after an almost six-year-long investigation into his alleged activities.