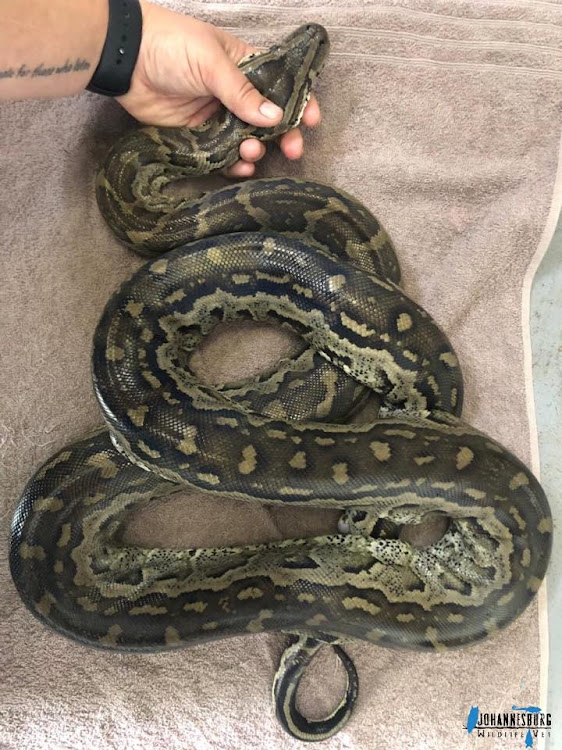 The 2m southern African python which was released back into the wild after someone drove over its head about two weeks' ago in the north of Pretoria.
Image: Facebook/Johannesburg Wildlife Veterinary Hospital

A 2m southern African python (Python natalensis) has experienced human kindness after experiencing the pain of a deliberate attempt to kill it.

The snake has been released back into the wild after someone drove over its head in the north of Pretoria.

The "hit and run" occurred about two weeks ago.

"Weighing in at 5kg, he was about 2m long! He was given a clean bill of health and was successfully released in a suitable and secure environment."

The snake was first taken to Bird and Exotic Animal Hospital in Onderstepoort where it was treated by Dr Dorianne Elliott.

"People were driving down the road. They saw the python crossing the road and the people in front purposefully drove over him, so they stopped and picked him and brought him straight here (to the hospital)," Elliott said.

"He was very dazed. He was bleeding severely from the mouth, so we gave him painkillers for about a week until we could see there was no severe damage."

Elliott said people have a bad attitude towards snakes because they are misunderstood.

"Everything from a sort of traditional African folklore right up to the Christian thing of the snake in the Garden of Eden and that, a helluva lot of people have got a bad attitude towards snakes. People kill snakes purposefully all the time."

Elliott said pythons are "quite flexible" because they eat large prey.

"The skull is very flexible. It's not like ours (humans) that would crack … I think he (the snake) was just damn lucky. I think the car went over him quickly and it just pressed down, because he was bleeding really bad but nothing appeared to shattered."

There was no damage to his brain or jaw.