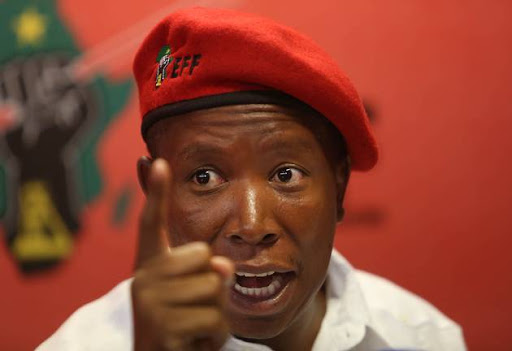 EFF leader Julius Malema said in an interview with eNCA on Tuesday morning that his party's finances are open to scrutiny.
Image: ALON SKUY/THE TIMES

EFF leader Julius Malema will be laying a complaint of political intolerance with the Electoral Commission of SA (IEC) after ANC members allegedly tried to prevent him  entering a voting station at Dambuza township in Pietermaritzburg.

“The EFF also demands that the IEC take appropriate action against the ANC to restore and set the tone throughout the country for the upcoming local government elections,” the party said in a statement on Sunday.

The EFF along with other political parties are travelling around the country canvassing South Africans to vote for them on November 1.

A video tweeted by the party showed people wearing ANC-branded clothing engaged in verbal altercations with EFF members and a gate at a voter station being closed.

[VIDEO 🎥]: We want to make it categorically clear that there are no no-go areas for the EFF and no amount of drunk and disorderly behaviour by foolish individuals will stop us from campaigning. #RegisterToVoteEFF pic.twitter.com/D6JhqfuCA4

The EFF said while aware that Dambuza was the home of higher education and training minister Blade Nzimande, , it wanted “to make it categorically clear that there are no no-go areas for the EFF”.

“The EFF condemns the pure thuggery of the ANC in Dambuza, KwaZulu-Natal, which tried and dismally failed to intimidate the president and commander-in-chief Julius Malema while he was on a campaign trail.”

The party charged that the ANC was starting to lose control in some of its strongholds in the province.

“In clear desperation, and seeing that their political power is slipping away, the criminals and drunkards of the dying ruling party launched an attack on EFF members, gazebos and attacking our members who were exercising their democratic right to urge South Africans to register to vote.,” it said.

“The EFF wants to make it categorically clear that there are no no-go areas where the EFF can't campaign and no amount of drunk and disorderly behaviour by foolish individuals will stop or prevent us from campaigning,” the party said.

ANC president Cyril Ramaphosa condemned the incident saying he was against any political party being prevented from campaigning.

“That is clearly set out in our constitution and our democracy dictates that all political parties have the right to campaign and go out to the population. So I would investigate it but I take a very dim view about fights between political parties. That should not be allowed, whoever the political parties are.”

The ANC in the province, meanwhile, called on its members to “exercise maximum restraint”.

“The ANC has been inundated with calls following incidents of political intolerance that took place in two voting stations in Ward 21 and Ward 14 of Umsunduzi Local Municipality, Dambuza and Willowfontein, respectively,” provincial party spokesperson Nhlakanipho Ntombela said in a statement.

“We are calling on the police to investigate allegations of [barricading] the entrance for other political parties by ANC members so that other parties could not access the area.

“The ANC is the midwife to the country's democracy in this country, which guaranteed free political activity. Therefore, any attempts to deny access to other parties in any area must be discouraged.

“We call on all political parties to restrain their members at all times as our paths will continue to meet as we campaign in different areas ahead of the elections.”

Ntombela added that the party strongly condemned the alleged manhandling of an elderly woman by the EFF leader's protectors.