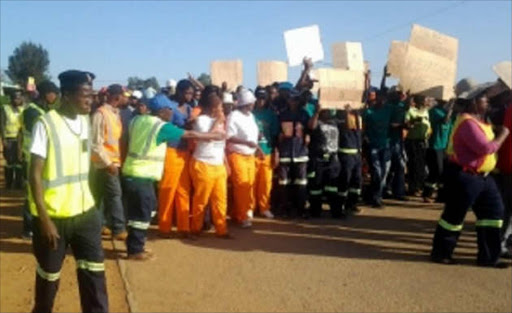 Building of the R164-million Sarah Baartman Centre of Remembrance in Hankey was halted yesterday when about 200 Lubbe Construction workers blocked the town’s Main Street. The strikers, who all live in the town, want the same pay as those brought in from Johannesburg and Rustenburg. They claim they earn only R3 000 a month  while those from the north are paid R9 000.The Department of Arts and Culture started the R164-million project two years ago and planned to have it completed this month. The centre is being built next to the grave of celebrated Khoikhoi beauty Baartman, who visited Europe in the early 19th century and was put on display as a freak. Police spokeswoman captain Gerda Swart said protesters blocked the road for 2½ hours. Protester Derrick Jaffon said: “We downed tools last month and handed our grievances to the Kouga Municipality.” But he claimed the construction company kept ignoring their complaints – even those sent through the municipality. He said about 50 workers had received letters last month saying their contracts would end this month, with no explanation. Another protester, Lungile Mooi, said Arts and Culture had promised that workers from Hankey would be used, but now outsiders were being employed. Kouga municipal spokesman Mfundo Sobele said a meeting involving officials, the contractor and worker representatives would take place today. Lubbe Construction managing director Sam Lubbe did not respond to questions. Arts and Culture spokeswoman Zimasa Velaphi said she would respond today.