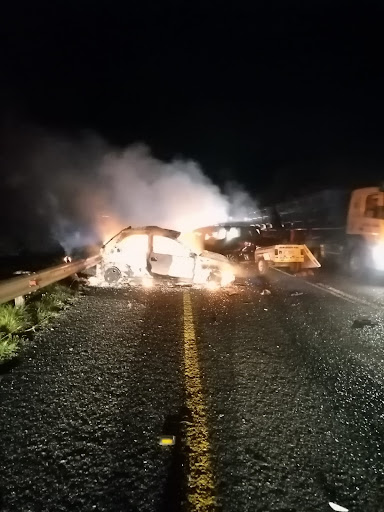 ON FIRE: The burning Opel Corsa in which two people died in a crash in Humansdorp on Friday morning
Image: SUPPLIED

Two people died after two vehicles collided on the N2 in Humansdorp on Friday morning.

The head-on collision between a Mazda 5 and Opel Corsa happened at about 4.40am at the Kareedouw turn-off, according to provincial transport spokesperson Unathi Binqose.

“[The] Opel Corsa caught fire after the impact.

“The driver [was] trapped and burnt beyond recognition and a male passenger also died on the scene.

“The driver [of the Mazda] sustained injuries.

“The other four occupants of the Mazda 5 escaped unharmed,” Binqose said.

Binqose said the gender of the driver in the Opel Corsa could not be determined.

Kareedouw police are investigating a case of culpable homicide.