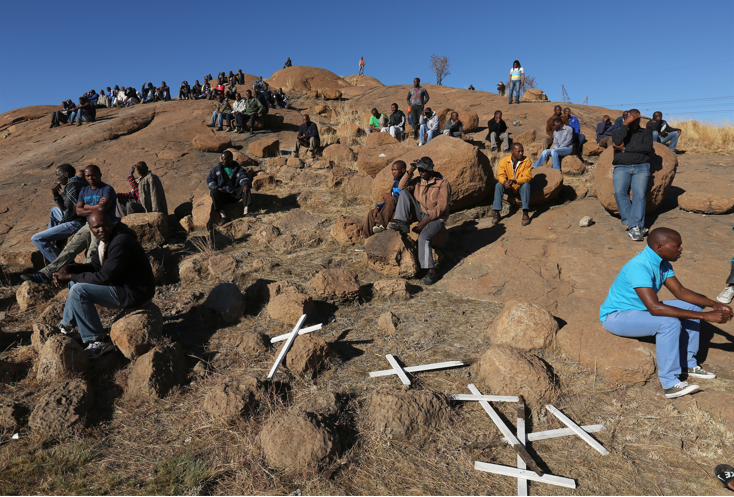 Crosses are placed at a hill known as the "Hill of Horror", during the one-year anniversary commemorations to mark the killings of 34 striking platinum miners shot dead by police outside the Lonmin's Marikana platinum mine in Rustenburg, 100 km (62 miles) northwest of Johannesburg, on August 16, 2013.
Image: REUTERS/Siphiwe Sibeko (SOUTH AFRICA - Tags: POLITICS BUSINESS EMPLOYMENT ANNIVERSARY)

The state has paid just more than R70m in damages to the families of those killed in Marikana in August 2012 but there remains a dispute with the lawyers representing the families of the 36 dead miners regarding the amount of constitutional damages that the state still needs to pay.

Briefing the media on the “reparations” made after the incidents at Marikana — which resulted in the deaths of 44 people — solicitor-general Fhedzisani Pandelani said it had settled with the Socio Economic Rights Institute (Seri), which represented 36 families, and had paid out R69m to 35 families.

He said the state also settled for R3.9m in a claim for loss of support lodged by the Wits Law Clinic, which represented one family.

However, a dispute remained with Seri, which is still claiming R1.5m for constitutional damage for each family.

“Having paid under R70m on behalf of 35 families, the matter would have been resolved. Seri came back to us and said it needed general and constitutional damages for all 36 claimants. That is not easy to quantify,” Pandelani said.

Pandelani said the state believed it needed to approach the matter with some degree of humility.

“We said we are prepared to pay all the claimants represented by Seri R500,000 per family, without prejudice. That offer has been rejected. A counter-offer was they needed R1.5m for each claimant they were representing,” he said.

Pandelani said the offer by the state of additional R500,000 comes against the background of the state already having paid just under R70m.

“The R500,000 that we are offering has solely been in the spirit of good faith. That matter has not been resolved,” he said.

“We have had matters relating to loss of support, past hospital and medical expenses, future medical expenses and hospitalisation, emotional shock and psychiatric injury, grief and emotional suffering, loss of family and parental support, and general damages.”

Pandelani said the state was still in settlement negotiations with two other law firms representing the injured and arrested miners.

One is Maluleke Msimang Attorneys, which represents two types of claimants; those who were shot and wounded on August 16 2012, and those who were unlawfully arrested and detained during various incidents of violence that engulfed Marikana.

Another law firm is Tlhathla Attorneys, which represents 27 claimants who were assaulted and shot at in the area.

“Fundamentally, those who passed away, all of them we have settled these matters.”

He said matters which had not yet been finalised were with those who were injured and arrested.