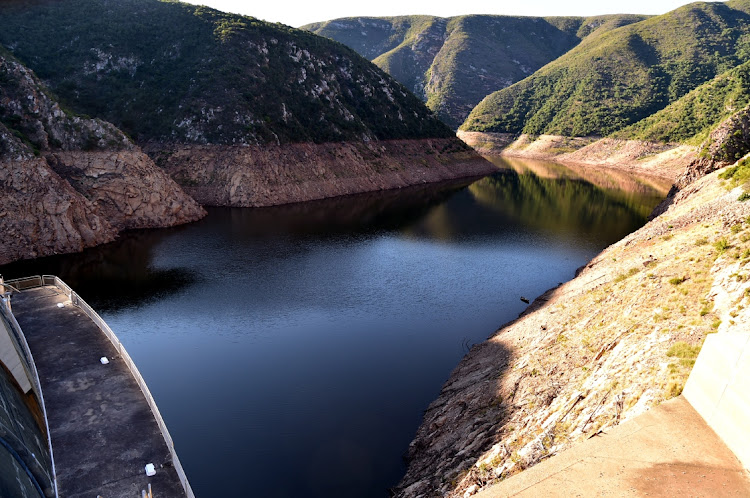 RUNNING ON EMPTY: The Kouga Dam, which supplies farmers in the Gamtoos Valley, is down to 7% of its capacity
Image: EUGENE COETZEE

Gamtoos Valley farmers and thousands of workers they employ are facing a bleak year as tough new water restrictions  kick in.

The national department of water and  sanitation has ruled that the area’s agricultural sector can extract just 20% of its legal quota from the depleted Kouga Dam.

This means while the immediate citrus harvest should be secure, the next one will be shaped by the need for survival and all possible cutbacks will have to be considered, the Gamtoos  Farmers Association says.

The DA is calling the situation in the Gamtoos one of the biggest crises facing the Eastern Cape, not least because of the millions of rand generated for the provincial economy by the agri-industry there, and it wants Bhisho to fund new boreholes to help the valley farmers survive until the next rains.

Meanwhile, the Gamtoos Irrigation Board, which manages the Kouga Dam, has declared a new three-days-off, four-days-on operations regime to minimise losses and ensure the meagre flow reaches farmers at the bottom end of the distribution system.

Gamtoos Farmers Association chair Petrus du Preez said on Wednesday the organisation’s members, who collectively run about 5,000ha of citrus in the valley, were on average about midway through their present harvest.

“It should be secure. But with 20% of our water allocation there is no ways you can secure the 2021 season for a good yield.

“At best it will be a matter of survival. Some orchards will be lost.”

Gamtoos farmers exported 10-million boxes of oranges in 2019 and despite irrigation restrictions would likely achieve the same figure in 2020, he said.

“That’s as long as markets allow us to sell what we pick and with Covid-19 still around we don’t know what is going to happen.”

The only reason farmers had managed to sustain the previous year’s export was by improved management and technology, he said.

“We’ve been introducing these improvements over four years and we can now stretch every litre of water to do nearly double what it did before.

“But there’s not much more we can do in that regard.”

Du Preez said survival mode would involve looking at  all costs including for electricity and fuel.

“The aim will be to survive on less.”

Besides the majority citrus component, the 132 Gamtoos irrigation farmers ran 8,000ha focused also on vegetables and dairy, he said.

Together they employed about 8,000 off-season permanent workers and that figure at least doubled for peak season planting and harvesting which comprised about five months of the year.

“Each of those 16,000-odd workers have an average of about four dependents, which means Gamtoos agriculture supports at least 64,000 people.”

The aim during hard times in the valley was always to retain the permanent workers, he said.

“But I can see with the water and the economy together as bad as they are we are possibly going to have to look at strategies like short time.”

“It will require very fine planning. Most important will be to look after our ‘soldiers’, our 20-year-old trees.

“If the Kouga runs dry  we will have nothing, but we have learnt how to be very careful with every drop of water and how to adjust our irrigation accordingly.”

Malan said he would as usual be letting his seasonal workers go at the end of September and would look at the water situation at the end of the year when it came to hiring time again.

“I can’t at this stage see a need for retrenching any permanent staff, though I may have to look at short time.”

Gamtoos Irrigation Board CEO Rienette Colesky said the board measured every drop in the Kouga Dam supply system.

“We have 765 water meters linked up to our computer system and each meter is read once a month.

“Each of the farmers receives regular updates to let them know where they stand with their consumption and where a quota is used up we lock down that allocation because we no longer have a legal right to supply any more water.”

She said the new restrictions affected all three Kouga Dam user groups with 80% for Gamtoos agriculture — allowing the farmers just 20% of their normal legal allocation — 70% for the Nelson Mandela metro and 30% for Hankey and Patensie.

“The dam level is down to 7% this morning but in fact we can only go down about another 3.5% before there are problems with extraction because of where the outlet pipe lies.

“So it is very low but the new restrictions are aimed at ensuring that it will not run dry.”

To optimise and conserve the supply to the farmers, the board had introduced a new regime on Monday, she said.

“The releases will be stopped for three days and run for four days to ensure there is flow even when it gets to the farmers at the end of the distribution line.

“Our losses through evaporation and leaks are very small compared to other systems but the less we release through the system the better.”

The DA called a month ago for the metro to stop extracting from the Kouga Dam given it had alternative resources, while   Hankey and Patensie and the Gamtoos farmers did not.

DA member of the provincial legislature Retief Odendaal said on Wednesday in a letter to Eastern Cape Premier Oscar Mabuyane, copied to department of rural development and agrarian reform MEC Nomakhosazana Meth, that though the metro had until now rejected the call, it still stood.

“This will now not be adequate, however.

“As such I request that you immediately consider making emergency disaster funding available to farmers in a bid to support the region with infrastructure to maximise groundwater extraction.

“This would go a long way in mitigating the worst impacts of the drastic water cuts and could potentially maintain the orchards till the rains come.”

Questions were sent to the premier’s spokesperson but he referred them to the department of rural development, which could not be reached for comment.