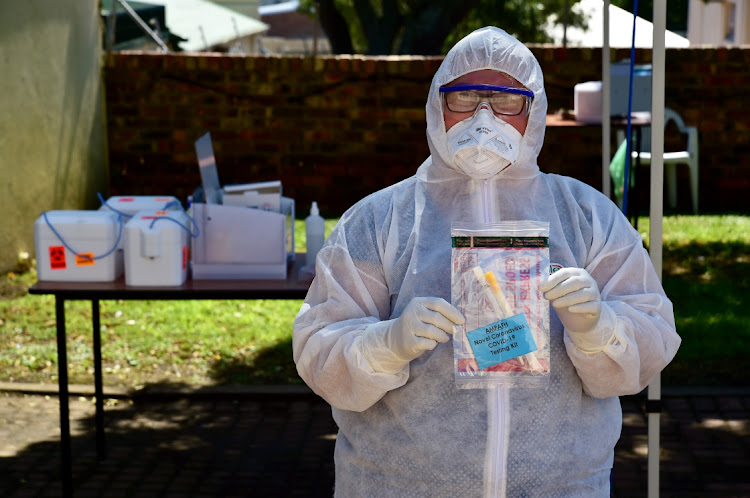 National pathology service Ampath Laboratories has launched drive-in swab collections for Covid-19 at fixed depots across SA, including at its branch in Pickering Street, Port Elizabeth.

The drive-through service, launched countrywide on Monday in the wake of President Cyril Ramaphosa’s speech on Sunday night, offers those who suspect they might have contracted the virus an easy option to be tested.

According to a sister at the Pickering Street premises, who asked not be to be named, the service is to assist the public in getting tested.

The sister said the drive-through option was best considering the high risk of infection when people were in close contact with each other.

Behind the Ampath Lab’s building, a makeshift testing station has been set up with two medical testing staff dressed in protective clothing from head to toe.

Before arriving at the drive-through swab collection station, it was important to first make an appointment with Ampath after being referred by a doctor, the sister said.

She said that after consulting with a doctor, a patient would be issued with specific documentation to be submitted to Ampath upon arrival.

Patients’ hands are then sanitised, they are given a face mask and their personal details noted down before nasal and throat swabs are taken to be sent to Pretoria for testing.

Results are usually available within 24 hours depending on the backlog at the Pretoria lab, the sister said.

The results are then communicated to the individual by a doctor.

People wanting to be tested are strongly advised to first consult with their doctor and call Ampath before going to the premises.

Costs for the tests could be covered by some medical aids or an upfront payment of R990 was required, the sister said.

She could not divulge how many tests had already been conducted at the Port Elizabeth branch.