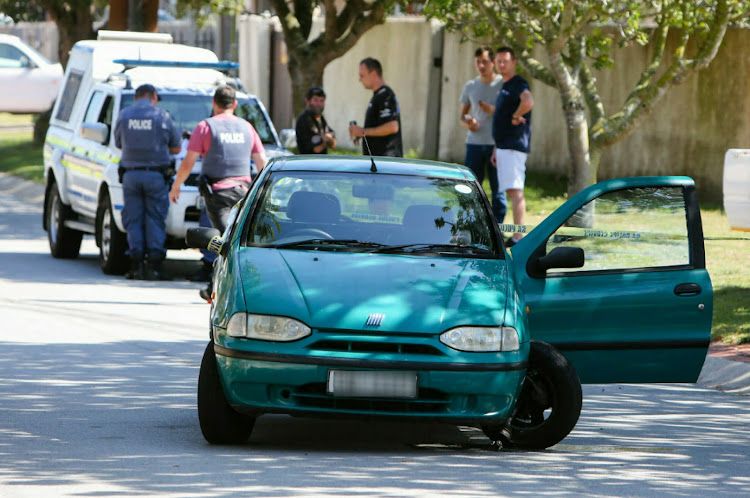 Hapless robbers allegedly held up a liquor store before hijacking two vehicles and crashing their getaway car during a dramatic chase that ended in the arrest of three suspects.

The robbery, at Prestons liquor store in Stella Londt Drive, Fernglen, happened at about 10am on Thursday when six men stormed the premises and took several staff and customers hostage.

According to witnesses, the men appeared well-organised and calm – that is until it all went very wrong for the gang, who then hijacked a bakkie and at least one car.

Three of the six suspects were arrested shortly afterwards after posing as workers on a construction site at a house in Newton Park.

One witness, who declined to be named, was waiting to draw money at the Nedbank ATM outside the liquor store when the suspects struck.

“A Toyota Avanza stopped at the parking bay next to the ATM and I thought it was suspicious.

“I managed to sneak a picture with my cellphone before one of the men got out of the car and put a gun in my face,” he said.

“They forced me and the woman in front of me at the ATM into the [liquor] store.

“By that stage, another two men had come from the back of the store and were ushering all the staff and customers to the front of the shop.

“They searched all of us several times but I managed to put my cellphone between crates of beers.”

The man said the suspects then ran in and out of the store, loading the Avanza – which had by then reversed-parked outside the shop – with liquor.

“That car was packed with alcohol.

“There was so much alcohol that they did not have any more room to fit the others [suspects] in,” he said.

“By that stage, there was another getaway car parked [in Stella Londt Drive] but it was too far for them to run to.

“They then told the woman to hand over her bakkie keys.”

The men sped off in the Avanza, with three others on the back of the hijacked bakkie.

“They went in different directions and some of them were hanging on the back of the bakkie.

“By that stage, their [other] getaway car [a VW Polo] was parked in Cape Road.”

It was unclear if it had been hijacked earlier or hired by the robbers.

At this point, four suspects chased off in the Polo towards Newton Park.

“By this stage, the bakkie had been found abandoned in Cape Road,” Naidu said.

“Various security companies assisted in the chase and search for the Polo.

“During the search, the Polo crashed into a vehicle at the Dias Road and Newton Street intersection.”

The Polo drove about 100m from the intersection before coming to a standstill and four men abandoned the car.

“They ran across the road [towards Laptop Land] where a Fiat Palio was hijacked.”

The owner of the car, who declined to be named, said he had been in it with two other people when the gunmen ran up.

“I was getting out when one man ran up and showed me a gun that was stuck in the front of his pants. He wanted the car keys and I gave them to them.

“The other two people in the car then got out and they [suspects] sped off in it.”

A private security company and the police were alerted and gave chase.

Four streets down, the Fiat came to a stop after the driver hit the pavement outside a house in King Edward Street, Newton Park. Jaco Botha, 48, of Mossel Bay, who was in town to visit his sick father, was standing in the back garden of a house when the car stopped.

“I saw someone fall over the wall into the back garden. I ran up to him and the next thing a gun was pointed at my head.

“He did not say a word and I just put my hands up.

“Within seconds, three more people scaled the wall and followed him.

“They ran through the garden and jumped into the neighbouring property where they are busy with construction work,” he said.

“Within minutes, the police were there surrounding the street.

“The men were caught on the construction site pretending to be workers.

“One was actually drilling when they caught him.”

Botha said it was a frightening ordeal to have a gun pointed in his face.

“I am still a bit shaken up. “All of a sudden they were there and I had a gun in my face,” he said.

Police said the Avanza was fitted with licence plates stolen from a car in Cape Road.

Three of the suspects were still on the run last night and the Avanza had still not been recovered.

Naidu said that all three arrested men, aged 22, 28 and 33, would appear in the Port Elizabeth Magistrate’s Court on Monday.