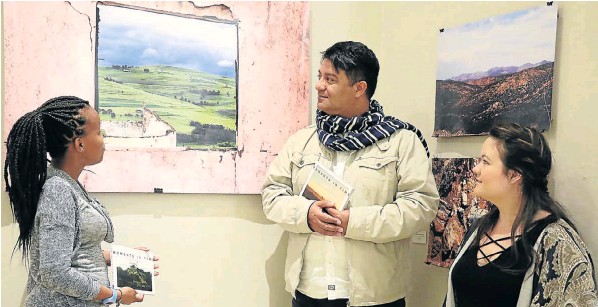 Heritage sites in the Eastern Cape are derelict, inaccessible and failing to preserve the province’s rich history.

This is the view of Nelson Mandela University student Lukhanyo Kepe.

He was part of a group who travelled around the province on an 18-month jaunt to visit hundreds of sites.

The trip was supported by the National Lotteries Commission and Nelson Mandela University’s faculty of arts.

Kepe, along with 12 researchers, unveiled photographs taken during their journey at the launch of three books at the Athenaeum last week.

Kepe described the trip as a heartbreaking experience as well as an eye-opener.

“You are well aware that we were looking at the cultural, political and natural heritage and history of the Eastern Cape,” he said.

“It was a very emotional and spiritual journey for me [because] of the content that was excavated.”

During the trip, Kepe said they even struggled to locate King Hintsa ka Khawuta’s grave near Willowvale.

“It is important for us to retell what really happened to our people for us to celebrate our true heritage as a country.”

Speaking on the book that covers Nelson Mandela Bay and surrounding areas, sociologist and co-author Ryan Pillay said older heritage sites often lacked information as to why they even existed.

“In the metro, the newer public art has visibility and more colours, but if we go deeper [further] in time, the tangible heritage is not well maintained. For me, a maintained heritage is that anybody, even a child or somebody who is 77 years old, can go up to a particular monument and just by reading the inscriptions they understand why this monument exists – then we [will] have maintained the heritage.

“For me, we might as well demolish all tangible heritage sites if we do not provide the relevant information.”

During the journey, the group found heritage sites that generated money were normally better kept than others.

On the book that looks at the Karoo, Pillay said: “Some major heritage sites, like Saartjie Baartman’s grave, are hidden to people and often locked. They have palisade fencing barring entry.”

Baartman was a Gamtoos Valley-born inhabitant who died in 1815 in France, where she was paraded as a spectacle due to her large buttocks.

Another researcher, Anelisa Mvemve, said she noted that often sites were either under construction or incomplete.

“An inclusion of people from the areas which we studied would have been beneficial in preserving these sites as well as the intangible heritage.

“Once people are included, they take ownership of places,” Mvemve said.

Asked how the province could improve the preservation of its heritage, another author, Jessica-Leigh Thornton, said she would like to see more signage leading to the sites and information.

Eastern Cape sport, recreation, arts & culture department spokesperson Andile Nduna said some of the heritage sites were locked due to vandalism but the municipalities would have the keys.