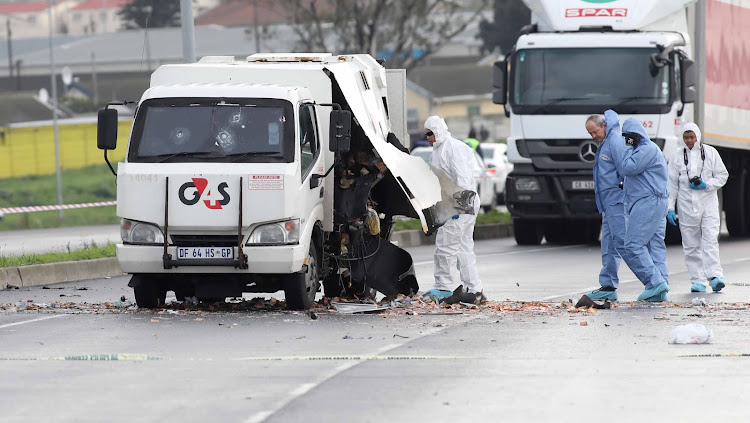 Police forensics on the scene at a cash-in-transit heist on the Jakes Gerwel Drive in Athlone, Cape Town.
Image: Esa Alexander

Wet bank notes lay stuck to the tarmac around a badly damaged G4S cash-in-transit van after it was shot at and blown up with commercial explosives on a busy motorway in Cape Town on Monday.

Police spokeswoman Lieutenant-Colonel Brenda Muridili confirmed that there had been a cash-in-transit heist on Jakes Gerwel Drive (formerly Vanguard Drive).

G4S Cash Solutions MD Keith Alberts said one of their armoured vehicles had been attacked while performing a cash collection in Athlone.

“A large number of armed robbers opened fire on the vehicle bringing it to a standstill. The robbers used commercial explosives to gain access to the vehicle and‚ at this stage‚ the cash loss is unknown‚” he said.

A team of forensic experts were combing the scene for clues just before 11am‚ watched by hundreds of bystanders.

A security officer‚ wearing a G4S uniform‚ walked around with his head covered by a bandage.

Video footage taken by witnesses recorded several gunshots being fired‚ causing mayhem in early-morning traffic as motorists tried to get away from the scene.

The road was cordoned off as residents of Hanover Park and Manenberg gathered nearby‚ some suggesting that if the wind picked up the wet cash would blow in their direction.

The side of the cash van appeared to have been ripped open. There were bullet impact marks on the front windows.

City of Cape Town spokesman Richard Coleman confirmed that Jakes Gerwel Drive had to be closed in both directions between Weltevreden and Turfhall Road.

The road was reopened at around 2pm.

Another cash van was ambushed on June 18, 2018, this time in Cape Town during the morning rush hour. One of the hundreds of bystanders captured the attack on video. Police spokesperson Lieutenant Colonel Brenda Muridili confirmed that a cash-in-transit incident had taken place on Jakes Gerwel Drive but could not yet provide further details.