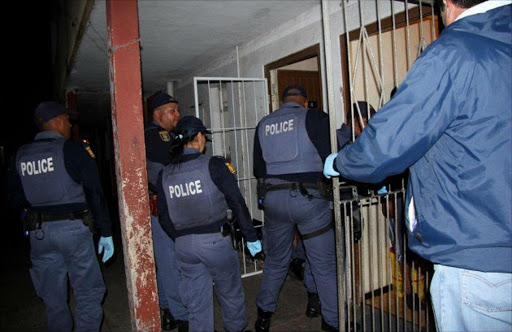 A massive police bust has netted 29 suspected gangsters – among them alleged gang bosses – and more than R1-million worth of drugs The two-day operation saw a series of raids on drug hotspots across Port Elizabeth and other towns. It involved 250 police officials and 26 K9 unit members and was part of the anti-gang campaign Operation Lockdown, which has been in full swing since March. Police top brass hailed the operation yesterday as a success. They also revealed that 600 people had been arrested over the past six months, mainly for gang or drug crimes, and five handgrenades, 85 firearms with 1 000 rounds of ammunition and 29 toy guns had been seized. In addition to the latest operation on Sunday and Monday night, in which R1-million worth of mandrax was confiscated, a variety of drugs worth about R2-million in total had been seized since March. Speaking at the 10111 centre in Schauderville, acting cluster commander Brigadier Ernie Neveling said the integrated operation had taken place in Port Elizabeth, Grahamstown, Uitenhage and Humansdorp. In Port Elizabeth, premises in Schauderville, Gelvandale, Sidwell and Algoa Park were searched. Neveling said one of the major successes had been the arrest of a man and woman on drugs charges after 19 000 mandrax tablets – and other drugs – were allegedly found inside their flat. He said the operation had followed months of intelligence gathering that resulted in several warrants of arrest linked to gangsterism being executed. On Monday night, police and Correctional Services officials raided the block for awaiting-trial prisoners at St Albans Prison. Several cellphones, weapons and drugs were confiscated. Deputy national commissioner Lieutenant- General Gary Kruser said the arrests were due to intelligence-driven operations in conjunction with the National Prosecuting Authority. “We are confident these operations . . . will disrupt gang activities in the focus areas,” Kruser said. As Operation Lockdown came to an end, alternative strategies had been put in place – such as the newly launched Operational Command Centre aimed at enhancing response times in emergency situations, he said. Provincial commissioner Lieutenant- General Liziwe Ntshinga said her office would ensure the operations continued. The 29 suspects will appear in various courts today and tomorrow.