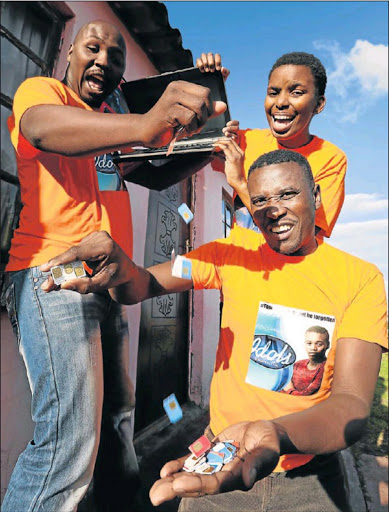 [caption id="attachment_105431" align="alignright" width="227"] VOTING FRENZY: Loyiso Gijana’s family and friends were out in force to vote for the talented singer this week. They are, from left, Mfundiso Vusani, Phumeza Koko and Sonwabo Lukus. They show the more than 150 sim cards they have used to cast votes for Loyiso. Picture: EUGENE COETZEE[/caption]

FOR a bit more than 48 hours every week, they turn their homes into mini voting stations where their fingers do the talking.

The families and friends of Nelson Mandela Bay Idols Top 7 finalists Amanda Antony, 22, of Port Elizabeth, and Loyiso Gijana, 16, of Uitenhage, have been hard at work since they reached the Top 10, trying to ensure they go as far as they can in the competition – hopefully even the final two.

Mondays and Tuesdays are frenetic, as voting opens immediately after the show ends on Sunday nights and closes at 10pm on the Tuesday.

In Mthengane Street, KwaNobuhle, a poster of Loyiso has been stuck up outside a pink house, indicating this is his family’s home.

Inside the house, there is a table laden with sim cards as voters are only allowed 100 votes per sim card. There is also one laptop, with family and friends using different usernames to vote on the Idols website.

“There’s a shift that votes during the day and the school kids join in late in the afternoon,” he said.

“On Sundays and Mondays, the voting goes on until the wee hours of the morning.

“In the meantime, there is someone who prepares snacks for the people who are voting.

“Our lives go back to normal on Tuesday after 10pm. By then, the tips of our fingers are painful but, hey, we have to do everything to make sure that Loyiso wins Idols.

“Even then we do not relax as we plan to get a bus that will transport Loyiso’s fans to Pretoria to boost his confidence on stage,” he said.

His aunt, Thundezwa Lukas, 34, described Loyiso as energetic, active and someone who loved joking around.

“Loyiso loves singing, even during family gatherings. He is the one who keeps us entertained,” she said.