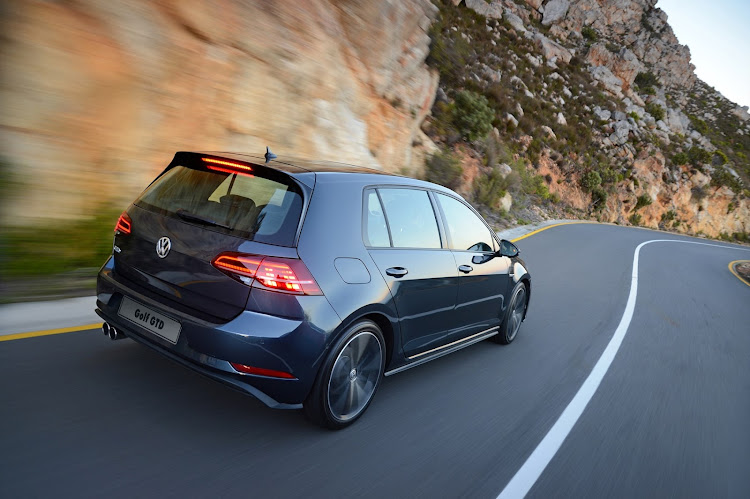 News out of the ongoing 2021 UN Climate Change Conference (COP26) in Glasgow has been dominated by major countries pledging to reach net zero emissions by specified dates. As part of that, the shift away from traditional petrol- and diesel-powered vehicles to fully electric cars continues to gather pace.

Automotive manufacturing hubs around the world are consequently moving resources away from developing and producing conventional fossil-fuel vehicles, with diesel facing a particularly dire future in the passenger car space. The result will be fewer options on the new market as time marches on before this flavour of powertrain eventually dies out completely.

“A number of nations have set their own targets for phasing out combustion engines, with the latest pledges out of COP26 further cementing the world’s shift towards electric,” said AutoTrader CEO George Mienie.

Diesel, of course, still enjoys a strong following in SA and popular examples remain available on the used market. A handful of interesting options have been cherry-picked from the most listed diesel-engined cars on AutoTrader for the first 10 months of the year. While there are a number of bakkies on the list, focus has been given to passenger vehicles, since diesel is likely to live on a little longer in the commercial sphere. 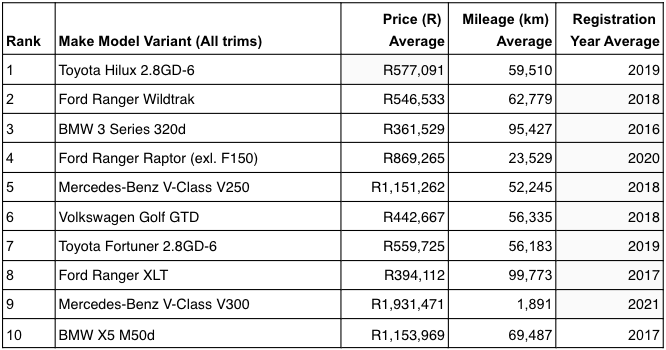 The BMW 320d is the least expensive variant here, featuring an average list price of around R360,000. In the facelifted version of the F30-generation 3 Series sedan, the 2.0-litre four-cylinder turbodiesel mill delivers a useful 140kW and 400Nm to the rear axle, all while sipping at a claimed 4.0l/100km.

While the Volkswagen Golf 7 GTD’s stay on the local market was a short one at just two years, the diesel-powered hatchback looks like a compelling purchase in the used space, featuring an average mileage of around 55,000km and an average list price of about R440,000. The 2.0-litre four-pot sends 130kW and 350Nm to the front wheels through a six-speed DSG transmission, hitting 100km/h in a claimed 7.4 seconds and boasting a fuel economy figure of 5.9l/100km, according to VW.

The BMW X5 M50d is another particularly interesting example, with its 3.0-litre straight-six diesel unit boasting as many as four turbochargers in G05-generation guise (and one fewer in the previous version). Peak outputs of 294kW and 760Nm are sent to all four corners, lending this 2.3-tonne SUV a claimed 0-100km/h sprint time of just 5.2 seconds. The average list price comes in at a little over R1.1m.

For those in need of a luxurious people mover, the Mercedes-Benz V300d is a tempting option, should your budget stretch to the average list price of more than R1.9m. This variant uses the Stuttgart-based firm’s latest OM654 2.0-litre unit, which sends a heady 176kW and 500Nm to the rear axle. The V250d employs an older, less powerful engine but bears an average list price almost R800,000 less.