Celeste Ntuli on making uncensored comedy: 'My job is to tell the truth' 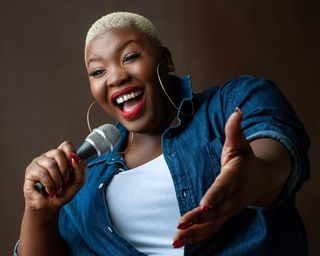 Comedienne and actress Celeste Ntuli says her life changed and her comedy kicked off on the right note when she was part of a talent search on the public broadcaster, SABC.

In 2009 she featured on So You Think You're Funny, and that's where she got to see what comedy is about and that it can be turned into a career.

“I got the chance to be mentored ... we shot that thing for like a month or two of just being among the best comedians that we've got in the country, dissecting what is comedy, what to write, what are the techniques, you know the like. That made me see that this is a whole thing.”

Over the years she has shown Mzansi her versatility and prowess, and she told TshisaLIVE she had to believe in her jokes and that gave her the ability to rise above the rest.

The trust in yourself is very important because you are never going to convince anyone on stage if you are not convinced yourself.

“I learnt along the way to understand how much of it is the business and that with comedy you are still going to do the work no matter how successful you are, its constant work.

Chris Rock, and the great comedian. I go to America and I find them in clubs and I'm like oh and I'm like yoh, it never stops, you are as good as your last show and also comedy is a continuous conversation so you are always learning.”

Celeste prides herself in embracing the rawness of comedy.

“Its comedy, I'm not the one to worry myself, honestly, I know we live in a sensitive world.

For me, it's still not sensitive enough because black people have been suffering the same, so it seems like people are sensitive of one issue, there's one issue that's been persistent and nobody wants to talk about it. So me, I'm feeling like I have to choose which one.

My job is to exercise my freedom of speech, my job is to tell the truth.

“The truth has nothing to do with your feelings and your sensitivity. Truth is truth, it is what it is, and also comedy. We play with puns, we play with  so many things, it's a sports for words.

I'm not the only one to be objective, the audience must be objective too and if you feel it's too much for you then don't listen to comedy.”