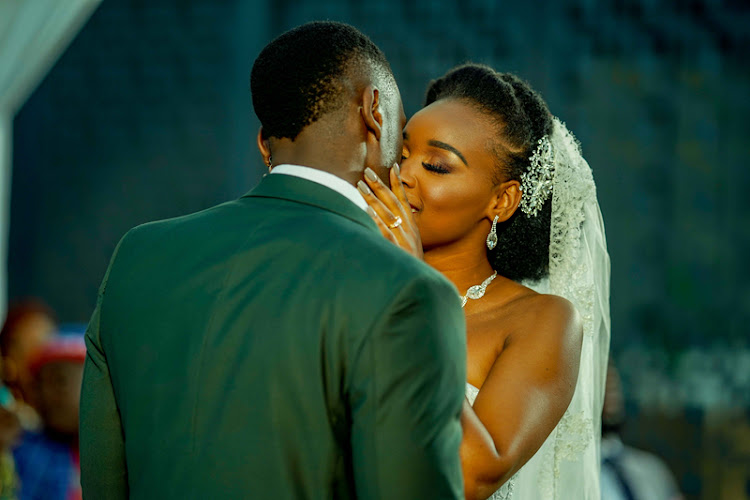 The lead actors of The Wife Bonko Khoza and Mbalenhle Mavimbela got Mzansi falling in love with them and their on-screen chemistry was crowned as the best on TV.
Image: Supplied

Showmax's first telenovela The Wife is back to give fans a glimpse behind the scenes of one of the most talked about show in the country.

It has dropped the trailer for The Wife: Behind The Veil, an eight-part special that takes fans on a journey to find out more about the Zulu brothers and the women who love them.

The  first two episodes of The Wife: Behind The Veil can be streamed on August 5, with two new episodes every Friday until August 26.

The episodes brings fan faves back to revisit the questions that kept The Wife at the top of Twitter every Thursday for two seasons.

When season two wrapped up tweeps couldn't help but crown the O.G's of the first season Mqhele (Bonko Khoza) and Hlomu (Mbalenhle Mavimbela)'s chemistry as the best on prime time TV.

The first episode in November 2021 took fans on a roller-coaster of emotions with the love story between these two, abuse, cheating scandals, marriage to having a child.

Fans will be excited to know in episode 1 of the special, Bonko and Mbalenhle Mavimbela (Hlomu) talk about their characters’ toxic love story and how the nation fell in and then out of love with Mqhele

Though the show making a comeback is news that should excite fans, The Wife was reportedly going through major cast changes for the third season, however neither Stained Glass nor MultiChoice confirmed the news.

In a statement shared with TshisaLIVE by the production company they confirmed season 3 but not the cast members.

“Multi award-winning production house Stained GlassTV is excited for the premiere of the third installation of the award-winning, record-breaking, Twitter-topping Showmax original telenovela The Wife.

“We are  in the pre-production phase that includes the contracting process for all cast and crew. All our principal actors have been confirmed to be part of The Wife for season 3. Stained Glass, the cast and crew can’t wait to bring viewers a formidable third season. Inspired by Dudu Busani-Dube’s best-selling book , S3 of The Wife will return to SA screens in November.”