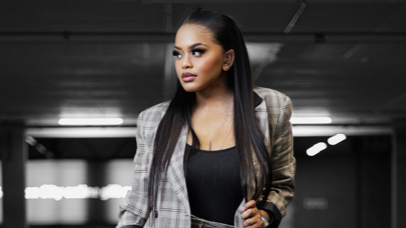 Media personality and businesswoman Lerato Kganyago has come out guns blazing against a popular Twitter blogger who called her "Bonang Lite" on Sunday.

The Metro FM DJ took to her Twitter timeline to have a go at what seemed to her to be an unwarranted attack.

“I will unravel you and every journalist who is feeding you information about people. I bother no-one. Make your point but don’t disrespect me," she tweeted after the blogger compared her to Bonang Matheba.

“Your two ID Numbers won’t hide who you are. Tweeting vile things about people from your grandmother's back room. KwaZulu-Natal isn’t as big as you think. You and your celeb friend tried to make my life uncomfortable, and I told you I will get you. @MusaKhawula I'm not the one”

The tweet that landed the blogger in hot water was one in which he accused Lerato of taking jobs after Bonang has left them .

Your 2 ID Numbers won’t hide who you are! Tweeting VILE things about people from your grandmothers back room, KZN isn’t as big as you think. You and your celeb friend tried to make my life uncomfortable, and I told you I will get you! @MusaKhawula IM NOT THE ONE!

Lerato threatened to expose the blogger and said he she would also reveal the journalist from whom the blogger was getting  inside information.

When she took over from Bonang at The Bridge on Metro FM, she reflected on the emotional trauma she went through after being blamed for co-host Bonang's dramatic Metro FM exit in 2017.

Lerato labelled the time as the “darkest moment” in her radio career.

In an interview on Metro FM's Afternoon Drive with Mo Flava and Masechaba Ndlovu, Lerato spoke openly about how she felt as the drama unfolded around her.

“I think my darkest moment and I'm not trying to blame anyone, but it was the day when I actually did the show and got blamed for her leaving the show.”

remember when bonang was at live amp? guess who to her job right after?

do you also remember when bonang left her job on metro fm doing the bridge? babes guess who took that job?

guess who will replace bonang at any other job that she leaves?