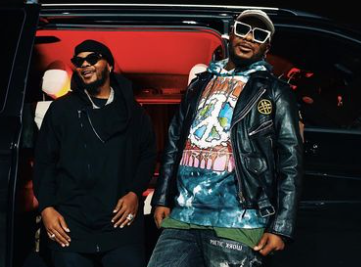 The Major League DJz are rubbing shoulders with some of Hollywood's elite.
Image: Instagram/ Major League

Major League DJz are on their way to achieving their mission to take amapiano to the world.

DJz were beaming with pride when announcing they had sold out a show at Parallel nightclub in Amsterdam on Friday.

Major League DJz discussed what fans could expect from their next album.

They also hinted that they were waiting on a potential collaboration with hip-hop superstar Drake: “But we need the big OVO [Drake] to confirm, that’s what we need.

“So let’s get this right, we’re expecting a Major League DJz project featuring Tinie Tempah, Mahalia, Jorja Smith, Stefflon Don ... and maybe even a Drake?” asked the host, to which the brothers confirm: “Yeah, and Ty [Dolla Sign].”

Major League DJz are the SA DJ duo of Bandile Mbere and Banele Mbere. Over the past few years they have taken the world by storm, most recently performing at the iconic music festival, Coachella, bringing the sounds of amapiano to the global stage.