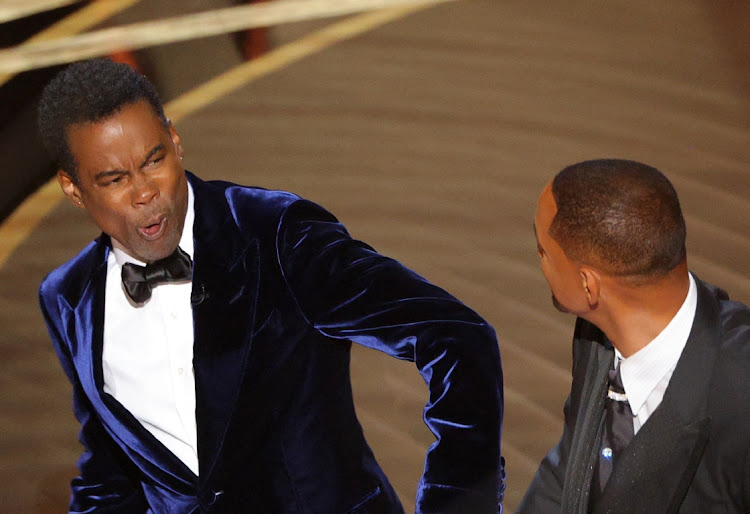 Comedian Chris Rock has spoken out on the incident which saw Will Smith, right, slap him during the Oscars ceremony. File photo.
Image: Brian Snyder/Reuters

US comedian Chris Rock says he is “still processing” what happened at the 2022 Oscars ceremony, speaking up for the first time since the incident.

On Sunday night, millions of viewers worldwide watched as actor and Academy Award winner Will Smith unexpectedly walked on stage and slapped Rock over a joke he made about Smith’s wife’s bald head.

Jada Pinkett Smith, an actress and host of the Facebook show Red Table Talk, has a medical condition that causes hair loss.

Rock had referenced the 1997 film G.I. Jane in which actress Demi Moore shaved her head.

The incident left many stunned and confused and sparked a huge backlash from the Academy of Motion Picture Arts and Sciences, which hands out the Oscars, Hollywood and the public. Smith has since apologised for his “unacceptable” behaviour while organisers of the Oscars condemned the incident and instituted an investigation into the matter.

The comedian, 57, has since broken his silence and told an audience at a comedy show in Boston, Massachusetts, that he was still processing what happened. A clip from the show was shared widely on social media, notably by Variety.

Chris Rock just addressed the Will Smith #Oscars slap for the first time during a sold-out stand-up show in Boston. https://t.co/Keka0MVhSd

Listen to the audio 👇 pic.twitter.com/TuqE8AHs6C

“How was your weekend?” Rock first asked the sold-out crowd at the venue before making it clear from the onset he did not plan to address the Oscars incident at length.

“I’m still processing what happened, so at some point I’ll talk about that s**t,” Rock told the crowd.

“It’ll be serious. It’ll be funny. But right now I’m going to tell some jokes.”

“I had written a whole show before this weekend.”

Rock’s brief statement received a standing ovation from the crowd.

Meanwhile, the academy has revealed that Smith refused a request to leave the Oscars ceremony after the incident as it started a process that could lead to the best actor winner’s expulsion from the group.

“Things unfolded in a way we could not have anticipated,” said organisers in a statement.

“While we would like to clarify that Mr Smith was asked to leave the ceremony and refused, we also recognise we could have handled the situation differently.”

The academy said it started a process that could lead to discipline against Smith for violations of its standards of conduct, “including inappropriate physical contact, abusive or threatening behaviour, and compromising the integrity of the Academy”.

Suspension, expulsion or other sanctions may be approved at its next board meeting on April 18.