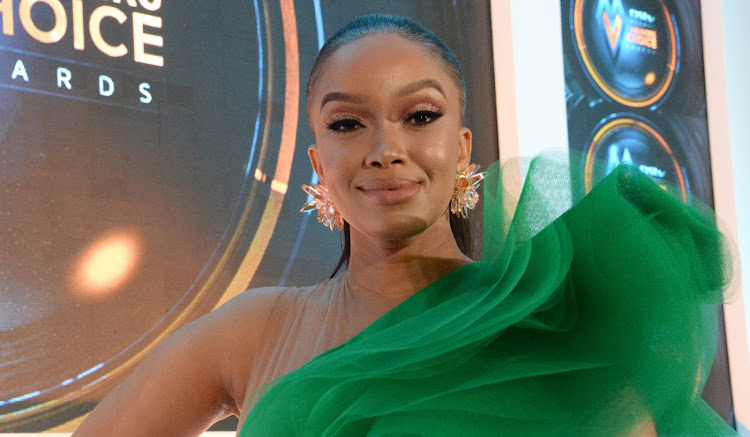 Dineo Langa is one of the celebrities who have called out the DA for reacting poorly to the Brackenfell High School clashes.
Image: Gallo Images/Oupa Bopape

Dineo Langa, Anele Mdoda, Kuli Roberts and Nina Hastie are among the celebrities who have hit out at the DA for “failing to address” the real issue regarding the clashes that took place at Brackenfell High School in Cape Town.

This after tension erupted between white parents and EFF members who gathered to protest against alleged racism at the school.

On Monday, EFF members arrived at the school after reports that some parents held a social event that was attended only by white pupils.

The school has 250 matric pupils, but only 78 — all white — attended the matric gathering which organisers, the school, and the Western Cape education department told Sunday Times Daily was a private event.

The protests turned ugly when violent clashes erupted between EFF members and residents.

Parents confronted the EFF protesters and a fight broke out. Pictures and videos of the violence were circulated on social media, leading many to share their outrage on the matter.

When addressing the issue, the ruling party in Western Cape, the DA, took to Twitter, to “condemn in the strongest terms the ongoing threatening attempts by the EFF to bend society to its will by interfering where it has absolutely no business to be”.

We condemn in the strongest terms the ongoing threatening attempts by the EFF to bend society to its will by interfering where it has absolutely no business to be. #BrackenfellHigh https://t.co/aV6Q3E9fpS

Unimpressed with the DA's response, Dineo Langa, Anele Mdoda, Kuli Roberts and Nina Hastie took to Twitter to call the party out for failing to be unbiased.

Dineo said the DA was a “racist party” and claimed they were “NOT” the people to vote for in any election, “no matter how many black people they try to use to feign inclusion”.

These are NOT the people to vote for in any election no matter how many black people they try use to feign inclusion. This is a racist party! Can't be bothered to condemn violence because that is manner in which they intend to rule should they ever even smell the opportunity! https://t.co/HXZtzpmaYr

Anele shared her disbelief that the DA missed the mark of not seeing anything wrong with the matric dance only allowing white kids to attend.

She also said the whole debacle was distracting for black children who needed to focus on their exams.

“We have seen enough testimony from the black children who have a lived existence of racism at Brackenfell High School. What I hate about racism is that it's distracting to the black kids. When do they study?” she asked.

Wait guys, so you really don't see ANYTHING wrong with a matric dance for net blankes ? Just white kids. Nothing in you says okay...okay, that's now ABSURD. https://t.co/SHfKFTZWe4

Guys stop arguing with anyone who says that matric dance was fair. We have seen enough testimony from the black children who have a lived existence of racism at Brackenfell High School. What I hate about racism is that it's distracting to the Black kids. When do they study ?

Nina asked the DA to “go start their own country because this country is for all South Africans ... where people are treated with dignity”.

She also called them out for not having enough black leaders in the party.

With all due respect, please go start your own country. Because this is a country for ALL SOUTH AFRICANS, and if you’re not interested in creating a country where we can ALL live with DIGNITY - go find a place where you can go hit each other with sticks. https://t.co/yah2Mb8uFj

Also, as a PARTY that has some black faces - surely YOU should understand what it means to not have at least “some black friends” AT A PARTY https://t.co/yah2Mb8uFj

Kuli kept it plain and straight to the point, saying, “So you expected all of this to continue instead of correcting the culture, you attack the attacked”. 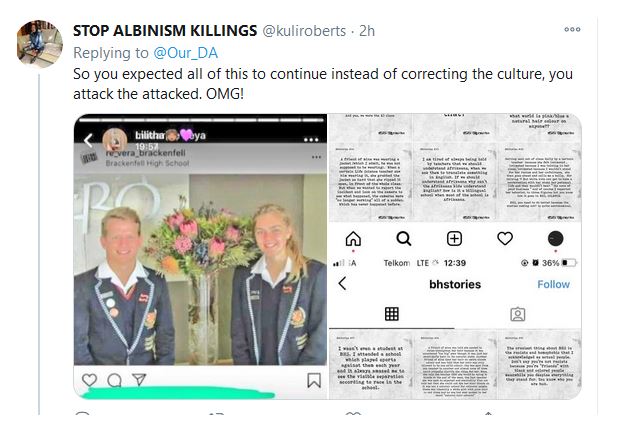 An organiser of the event told Sunday Times Daily last week that she blamed Covid-19 for the lack of diversity at the unofficial R500-a-head event, claiming there was room for only 100 pupils.

She said it was not meant to be exclusionary, but could not account for why there were no pupils of colour in attendance.