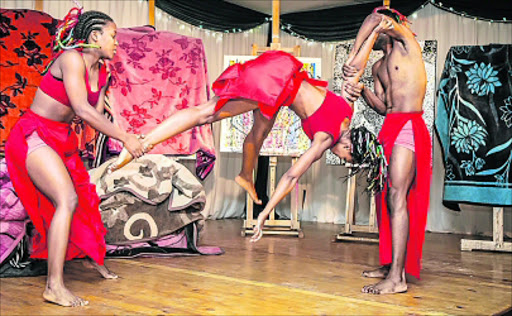 PAINTING, expressive dance and blankets merged in Grahamstown yesterday when six artists from the Living Artist Emporium unveiled a spectacular series of 10 paintings.

The works, around the theme "Make A Warmer Winter Happen", will be sold to raise funds for Nedbank's Winter Campaign, which has been donating blankets to orphaned and vulnerable children, women and the elderly across the countryduring June.

The paintings were unveiled during a performance by dancers of the First Physical Theatre, hosted by TV personality Bridget Masinga.

Dancers from the National School of the Arts performed a piece of classical ballet around the theme of winter's cold.

During the event, the Grahamstown Hospice and the Jabez Aids Health Centre received 50 blankets as well as R50000 each to be able to continue supporting and caring for terminally ill and HIV/Aids patients.

The paintings are bidding from R5000 and can be viewed on Nedbank's Facebook page.

All proceeds will be used to buy more blankets for communities around the country.