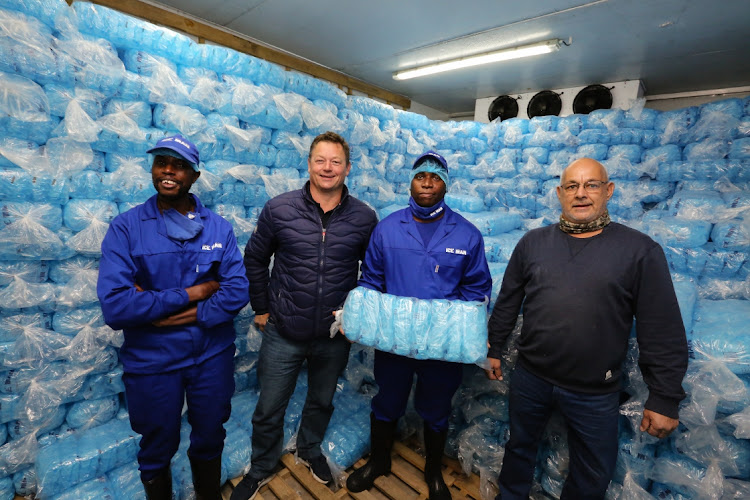 A holiday project to teach his children the value of money and hard work planted the seed for a whole new business venture, and now a Gqeberha businessman is looking to cement his place as the Eastern Cape’s “Ice Man”.

Sean Pretorius, 46, has been in the cooling business his whole working life, maintaining and repairing fridges, freezers and air conditioners since he left school and completed his studies.

He later started a business specialising in refrigeration and air conditioning — Air Africa.

But the opportunity for a secondary revenue stream presented itself late in 2020 in the form of an ice-making business.

Now he provides "food safe" ice to a number of supermarkets, liquor stores and petrol stations across the province.

“We were on holiday in St Francis Bay in December and I encouraged my kids to do something to make some pocket money, and to teach them some financial values in the process.

“We decided to sell ice.

“It sounded a little silly at the time, until we saw how quickly 1½ tonnes of ice sold,” Pretorius said.

The owner of a local supermarket approached Pretorius and asked if he would be interested in supplying them with ice because their supplier at the time, Ice Man, was closing up shop.

One thing led to another and Pretorius arranged to meet the owners of Ice Man to look at their operation.

“The business of ice sounds so simple, but once I really looked into the intricacies of what goes into making food-safe ice, and how rewarding it can be, it blew my mind.

“Within a few days we bought a large portion of their equipment and employed some of their staff.

“They were happy to share their client list with us and we took their name, Ice Man, as well.”

To keep their clients, Pretorius and his team also had to undergo a food safety audit under the strict protocols of the global food safety initiative.

This means their water has to be treated to adhere to global standards, their equipment has to pass annual audits, and their staff have to go through a screening and sanitising process before they are allowed to package the 3.5 tonnes of ice produced daily.

The water used goes through a series of charcoal and sediment filters before passing through an ultraviolet filter to ensure its quality.

The ice is also handled as little as possible as it passes through the packing process, and each blue plastic bag comes with a traceability code.

The new venture came with a price tag of about R2m, and within two months Ice Man operated from its new factory in Walmer as one of the few food-safe ice suppliers in the country.

“You want to ensure the quality of all the food you eat, but you are not picky about who makes your ice?

“Why not ensure that your ice also comes from a reputable source that operates on a global standard?”

Along with the equipment and staff, they also bought 80 tonnes of ice from the previous owners.

This was enough to keep the business going until they were ready to start producing and transporting food-safe ice to their new clients from their own facility.

“We are looking forward to December, which has always been the busiest time in the ice business.

“Half of the entire annual income happens in December .”

Derek Berghoff, 59, a mechanical engineer who has worked for Ice Man for 12 years, joined Pretorius and said he was happy to see the company in good hands.

“I am happy to remain a part of the business and it’s good to see the passion the new owners have for making a success of Ice Man.

“There are a lot of plans for expansion and I am excited to be a part of it.”

Over the next few months, Pretorius is looking to expand his cold storage facility to accommodate more than 300 tonnes of ice at any given time, and hopes to expand his reach beyond the Eastern Cape along the Garden Route and up the Wild Coast.