From a charity golf day to a women's road race and a wheelchair drive, SPAR Eastern Cape gives back to its community 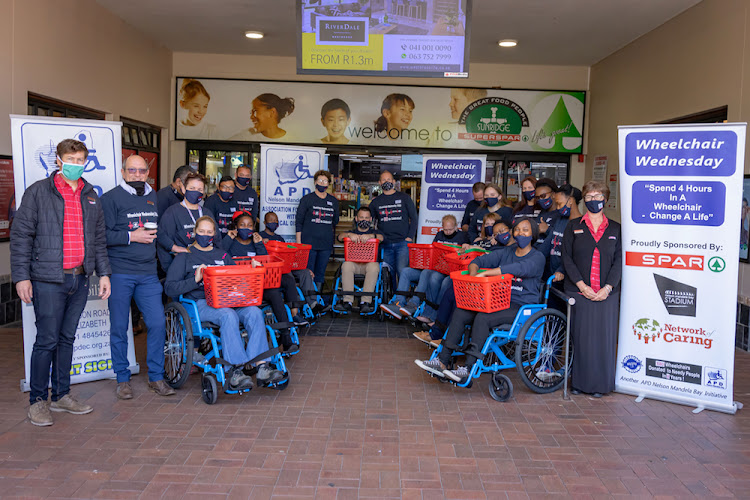 Despite worldwide disruption, SPAR Eastern Cape has continued to offer unwavering support to the local community and deserving beneficiaries.

Apart from donating food parcels and supporting blanket and clothes donations across the wider Eastern Cape, especially during lockdown, the retailer has rolled out events aimed at raising money for its beneficiaries. This included a golf day which attracted even non-golfers, to a tribute to late president Nelson Mandela at the Wheelchair Wednesday launch on July 16.

The Wheelchair Wednesday campaign, arranged by the Association for Persons with Physical Disabilities in Nelson Mandela Bay, is in its ninth year and the organisers are on track to reach an overall donation of 1,200 wheelchairs.

At SUPERSPAR Sunridge on Mandela Day, Port Elizabeth’s celebrities came out to spend 67 minutes in a wheelchair, undergoing what SPAR sponsorship and events manager Alan Stapleton has described as a “life-changing experience”. Their tasks included drawing R500 from an ATM to purchase groceries, which were donated to Cheshire Home Cleary Estate.

Covid-19 regulations created some delays, but due to the resolve of all parties to fulfil their commitments, the full campaign kicked off in October.

To broaden the range of support it provides, Wheelchair Wednesday joined forces with the Amputee Support Group this year to set up the Collect a Crutch drive.

Headed by Brian Paddey, this organisation concentrates on collecting walking aids for those who can't afford them, while offering counselling and material support to amputees and their families.

The Women’s Challenge road race was launched on January 27, only for the coronavirus to derail the hopes of thousands for a fun day of exercise on Port Elizabeth’s beachfront.

But as Stapleton has pointed out, the event is so much more than what happens on the actual day.

Despite its cancellation, Stapleton was able to find several positives, the highlight being financial contributions of R35,000 to each of Khazimla and the Community Chest in Port Elizabeth, and Options in George as part of the retailer’s commitment to the community.

“Apart from celebrating women and thanking our customers for their support, the Women’s Challenge has always stood for supporting communities,” said Stapleton.

In addition to the financial support, R40,000 in sanitary protection products was donated, while the goody bags for the race were given to several organisations across the Eastern Cape.

A new element this year delivered some special memories at the SPAR Charity Golf Day at Humewood in February. Linked to the SPAR Stop Plastic Campaign, event beneficiaries — the Foundation for Conservation of Coastal Birds and Wilderness Foundation Africa — highlighted the work being done in their spheres of focus in creating awareness about the environment.

Each received a donation of R35,000 to assist them in their respective fields.

An exciting addition was the chance for non-golfers to be introduced to the game by the club pros at Humewood. “For too long the golf day has been exclusive. It was great to be able to expose some new people to the game,” said Stapleton. “This was something really special and we want to grow this.”

Zwartkops Conservancy cleanup back on track

SPAR Eastern Cape and the Zwartkops Conservancy continue to work despite the disruption caused by Covid-19. The organisations’ mission is to maintain a healthy Swartkops River ecosystem to support the flora and fauna in the estuary.

Conservancy vice-chair Dale Clayton, one of its two environmental officers, said they had been sidelined for five weeks during level five of lockdown, but had been doing as much as they could since they got back on the river.

“Besides keeping the river clean, we run an education programme for the schools in the area, though that was also cut back because of Covid-19. But since September we have gone full-steam ahead, focusing on the primary schools to teach them about the environment,” said Clayton.

This article was paid for by SPAR Eastern Cape.