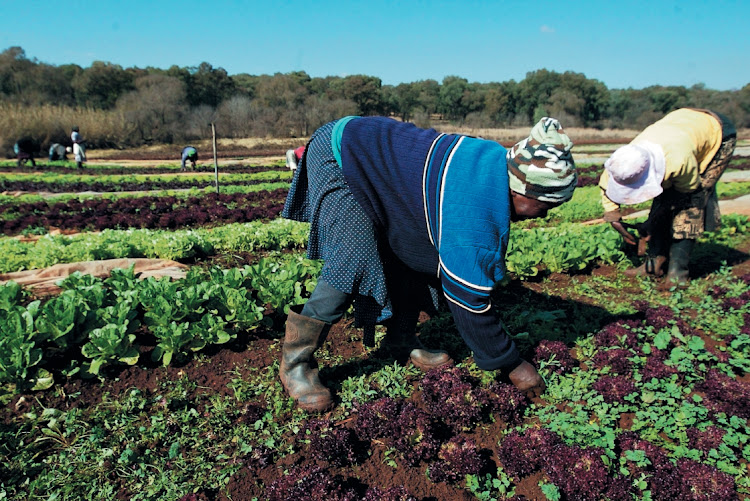 FRAGILE BALANCE: Women harvest vegetables in SA. An estimated three quarters of the world's food crops rely on pollinators such as bees and butterflies which could be under threat from glyphosate-based pesticides
Image: KEVIN SUTHERLAND

Where have all the bees and butterflies gone?

It sounds like a whimsical folk song, but environmental activists say it is deadly serious and that pesticides are killing these and other insects which play a vital role in both nature and crop farming.

The alleged culprit is the chemical glyphosate, the most widely used herbicide worldwide, which has featured recently in a series of court rulings against chemicals giant Monsanto in the US and a landmark ban in Austria.

In SA there are no prohibitions on its use and CropLife, representing the plant science sector in SA, says as long as it is used according to instructions glyphosate poses no risk.

In the US, however, rallying around the monarch butterfly as a flagship pollinator, activists have renewed efforts to have glyphosate-based pesticides removed from chain stores.

And in SA they are being fiercely opposed by organisations such as Groundwork and, here in Port Elizabeth, by Wildline.

Pollinators — including bees, butterflies and other insects but also small birds and lizards — move pollen from one plant to another, fertilising the receiving plant and triggering reproduction.

The process ensures the survival of wild vegetation but also three quarters of the world’s crops.

Wildline founder Arnold Slabbert said on Tuesday there was a large-scale die-off of pollinators in the Eastern Cape and the cause was clear, in his view.

“We’re seeing a major decline in species including insects and small birds.

“We’re on the verge of disaster.

“What I see with my own eyes and what I read in the new studies leaves me in no doubt — the main culprit is pesticides.”

“The broader pattern is that the massive use of agricultural chemicals is leading to a massive loss of biodiversity including pollinators.”

In a related case in May in the US, a judge ordered Bayer-owned Monsanto to pay R2bn to a couple who had claimed that glyphosate-based Roundup caused their cancer and, in July, Austria announced it had approved a ban on glyphosates.

CropLife SA adviser Dr Gerhard Verdoorn said, however, while there had been several bee die-off events in SA, glyphosate was safe if it was used properly.

“Pollinators are vitally important to our industry and we would not use this product if it was causing them harm.

“As long as users stick to the instructions on the labels, for instance not to apply while the plants are blossoming, there should be no problems.”

Euripidou said even this “safe use” argument was problematic, however, as workers were often illiterate.