DIY | Convert a mountain bike into an old-style motorcycle 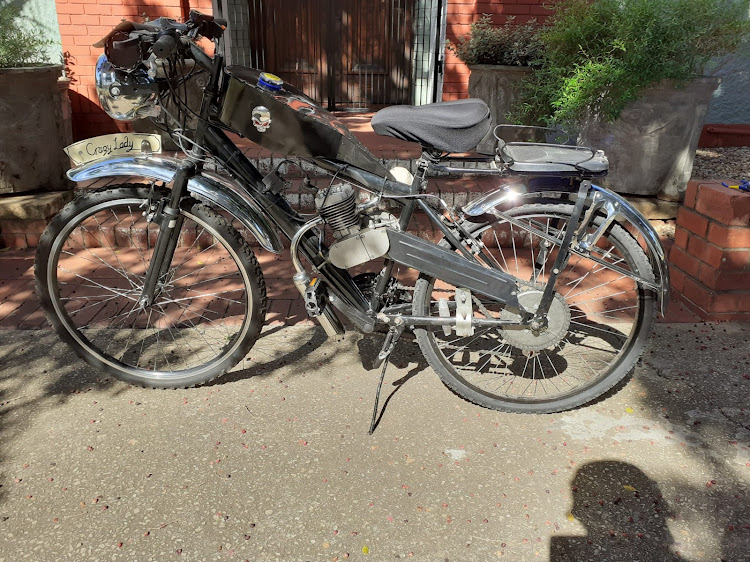 In this column, I’ll show how I converted a motorised mountain bike into a lovely, old-school motorcycle!

Some years ago, I bought a mountain bike  with a two-stroke gas engine. I intended to ride it just for fun.

The best part was that I didn’t need a licence.. It’s essentially still a bicycle — it  has pedals and can be (with some effort) ridden unpowered.

I had an accident with my Mazda in August 2014.

The insurance payout was insufficient to buy a decent second-hand car, so I used this bike to commute to work.

This state of affairs dragged on for over a year.

I became a familiar sight on that route, wearing an old leather jacket, my trademark black, leather-covered German helmet and flying goggles.

In October 2015, on the way to work, a car essentially forced me off the road. I was doing about 55km/h down Walmer Boulevard, and landed on a concrete island.

Fortunately, I wasn’t too badly injured, and in spite of a few scrapes was able to continue on to work.

Since I was still without other transport, I had no choice but to continue using the bike.

After hearing about my misfortune, an elderly aunt called  and asked  if I still wanted her Beetle.

She felt she was too old to drive any longer and decided to pass her 1962 bug on to me..

Of course I said yes, and fetched it right away.

With safer transport again, I put the bike in storage for a while.

It ended up standing for a few years until, finally, I considered selling it.

In March, I got the bike out and got it running again. But the moment I felt it take off under me, I decided against selling it.

Instead, I decided to update it  a bit, and keep and enjoy it.

I   fancied making the bike look like those old-fashioned original motorcycles.

I started by removing everything I felt  detracted from the look.  The frame was already painted gloss black, but it was covered with yucky yellow branding stickers.

I decided I liked the vintage/bobber/cafe racer look instead.

I procured a pair of new chrome steel mudguards and a chrome headlight pod from Second Gear in Mount Croix, and polished up the black paint on everything else.

I had to modify the front mudguard a little so that it would fit between the narrower front fork of my bike.

I made brackets to hold it in place and also had to trim away at one edge so that the brake caliper could operate without the mudguard obstructing it.

The bike came with pre-fitted brackets to hold the old-style number plate vertically on top of the front of the mudguard. I decided to keep those.

I based the number plate on searches I did on Pinterest and cut one from hardboard.

After coating it with spray paint (antique ivory), I sketched the name I’d chosen on both sides, and  Kay painted it on with black acrylic paint.

I only drilled a small hole to fit a mounting bracket near the front lip and used existing holes in the side struts to attach it to the struts of the luggage carrier rack on either side.

I still intend to fit a  tail-lamp when I find a suitable one.

I left the mudguards chrome. It makes the bike more visible — and it also looks rather nice.

The frame holding the headlight pod to the handle bar came from a Vuka scooter I worked on a while ago.

The light in the headlight comes from a battery-powered string of bright blue LED fairy lights stuck inside the reflector (which I got at a  Chinese shop in Newton Park for about R40).

I have no intention of riding this thing at night, but the bright lights are handy for visibility.

I bought a gel-padded saddle cover for the saddle, which makes the stock saddle blend in — and much more comfy.

I  still wasn’t  happy with the fuel tank — it looked a bit modern and small.

It’s only got a 2-litre capacity, which  goes a long way with this bike.

Finding a nice bike tank proved next to impossible, so I made a dummy tank to fit over the original instead.

I started with a cardboard template, then transferred it to flat sheet metal (cut from coffee cans) and riveted the panels together.

Once I was happy with the fit, I took it off again and sprayed it gloss black. A pair of chrome plastic skull stickers on the sides of the tank complete  the look.

I then relocated the bike stand from the rear wheel axle mounting to beside the left pedal. It took a lot more modification than you may think but I got it sorted out — eventually.

My old helmet was past it. Luckily I found one just like it on Marketplace, but in brown.

Though the “look”  isn’t quite finished yet, the bike is functional and I’ve already taken it out for a few  short cruises..

Next, I plan to sort out the tail-light and install a pull-start for the motor.

There you are then — if you’re not all-in for the expense of  a real “chopper”, “bobber” or “cafe racer”, you could just do something like this.