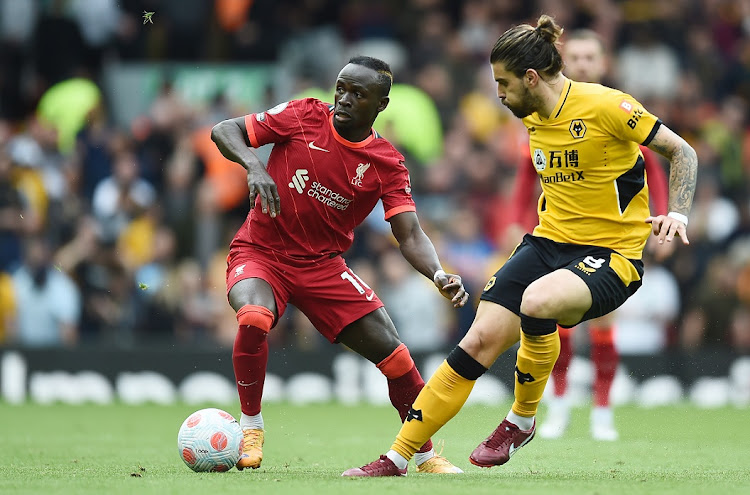 Sadio Mane (left) of Liverpool in action against Ruben Neves of Wolverhampton in the English Premier League match at Anfield in Liverpool May 22 2022.
Image: EPA/Peter Powell

Liverpool came from a goal down to beat Wolverhampton Wanderers 3-1 on Sunday, but it was not enough to earn them their second Premier League title, as they finished second, one point behind champions Manchester City who beat Aston Villa 3-2.

Wolves took a shock lead three minutes in, when defender Ibrahima Konate misjudged a bouncing ball from a goal kick allowing Raul Jimenez to run in behind on the right and pick out Pedro Neto to side-foot in his first goal of the season.

However, Liverpool equalised in the 24th minute when a cute Thiago Alcantara backheel set Sadio Mane free to charge at goal and strike an effort that was so fierce that goalkeeper Jose Sa could only get a hand to it before it went in.

Sa had to replaced at halftime, due to an injury, by John Ruddy and soon after Liverpool brought on Mohamed Salah in search of the winner and peppered shots at goal, only to see them continually blocked by Wolves defenders.

They found the breakthrough seven minutes from full time when Salah squeezed in a loose ball in the box. Full back Andy Robertson then put the gloss on the scoreline late on by sliding in Roberto Firmino's cutback.

However, City's own comeback 3-2 win over Villa meant they retained the title and Liverpool finished the season as runners-up on 92 points. Wolves finished 10th on 51 points.