Slow starts a concern for Solskjaer after Cup exit 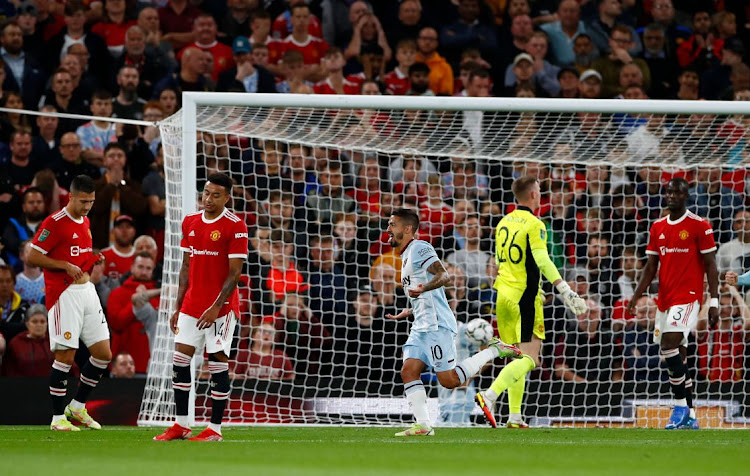 Ole Gunnar Solskjaer said Manchester United must eliminate the "pedestrian" starts from their game after an early goal from West Ham United's Manuel Lanzini knocked them out of the League Cup third round.

Manager Solskjaer made 11 changes to the United side that beat West Ham 2-1 in the Premier League on Sunday but was left frustrated by a largely ineffective performance as Lanzini's goal in the ninth minute sent the visitors through.

"The first 10 minutes we were slow, pedestrian, both in possession and out of possession and that's something we have to address," Solskjaer told reporters.

"I wasn't very pleased with the start at all ... we can't find ourselves in these situations and expect to get wins like we've done fantastically in the last year-and-a-half. But we need to start games better."

Solskjaer also defended his decision to ring in the changes.

"You want to go through but it's a long season. We've got big games coming up and that's the decision we made," he told Sky Sports.

"We're at the start of the season. We know it's going to be a long journey; Champions League, FA Cup, Premier League, we've got loads of games. We're going to keep doing what we're doing, trying to get results."

United will return to league action against Aston Villa on Saturday. Solskjaer's side have 13 points from their opening five games, level with Chelsea and Liverpool at the top of the table.

Chelsea striker Timo Werner said it was good to hear the fans sing his name again after he scored his first goal of the season in their shootout win over Aston Villa.

The German forward, who lost his place in the lineup after the arrival of Romelu Lukaku in the summer, scored in the 54th minute before the visitors responded through Cameron Archer to send the game to a shootout, which Chelsea won 4-3 to set up a clash with Southampton.

"It's good to be back on the scoresheet and good to keep winning," Werner told Chelsea TV. "We needed to keep winning and get into the next round of the League Cup and we're happy with the game."

Chelsea manager Thomas Tuchel, who earlier said Werner can forge a strong partnership with Lukaku, was pleased with the German's efforts.

"We brought him into a situation where he can score, this is what we want and then it's on him to score," he said. "That's why he's here. It's the best feeling for a striker to score."

Chelsea face Manchester City in the Premier League on Saturday.

Tottenham earned an away tie at Burnley after coming through an entertaining 3-2 penalties win at Wolves.

Goals by Tanguy Ndombele and Kane put Spurs in command but Wolves hit back through Leander Dendoncker and Daniel Podence.

Ruben Neves almost won it for Wolves late on with a deflected effort against the bar and he then missed his spot kick as Tottenham squeezed through.

Arsenal cruised into the fourth round with a 3-0 home win against third-tier AFC Wimbledon with Alexandre Lacazette scoring on his first start since April. Emile Smith Rowe and Eddie Nketiah struck late on.

Arsenal will host Leeds United in round four while Leicester City set up a home tie with high-flying Brighton and Hove Albion thanks to a 2-0 win at Millwall.