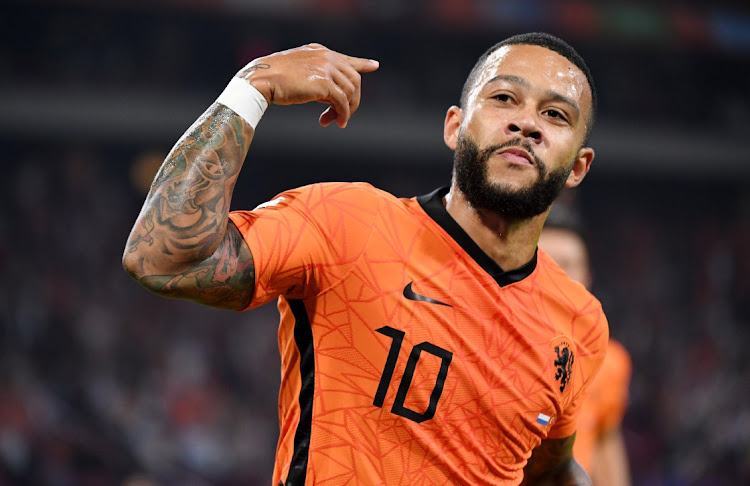 Memphis Depay scored a hat-trick as the Netherlands ran out 6-1 winners over 10-man Turkey at the Amsterdam Arena on Tuesday to go top of World Cup qualifying Group G.

It was the first international treble for the 27-year-old striker as the Dutch posted an emphatic victory for the second time in four days to reach 13 points from six games and take over from Turkey at the head of the section.

Davy Klaassen scored in the opening minute in a dream start for the home side, who had lost 4-2 to Turkey in Istanbul in March at the start of the qualifiers for the Qatar 2022 finals, before Depay added three more, including a penalty.

Guus Til scored the fifth 10 minutes from time and Donyell Malen added a sixth in stoppage time before a consolation goal for Cengiz Under.

Turkey slipped from top to third in the group as they stayed on 11 points with Norway moving second, behind the Dutch on goal difference, after beating Gibraltar 5-1 on Tuesday.

The Netherlands picked up where they left off after an emphatic 4-0 win over Montenegro on Saturday to snatch the lead as Klaassen combined with Depay to score almost straight from the kick off.

An aggressive Dutch approach led to Klaassen then providing the assist for Depay’s first goal in the 17th minute as they doubled the score and it was 3-0 at halftime after Depay converted a 38th-minute penalty.

Caglar Soyuncu was booked for a foul on Klaassen to concede the spot kick, which was awarded after a VAR check. The Turkey defender was then sent off for a second caution on the stroke of halftime.

Depay completed his hat-trick with a diving header on the goal-line to touch home Steven Berghuis’s cross in the 54th minute before Til and Malen sealed the win with two more goals.

The one blemish came from a errant pass from goalkeeper Justin Bijlow that allowed Under to score for Turkey with the last kick of the game.

It was a triumphant night for veteran coach Louis van Gaal at the start of his third spell as coach. He had just days to prepare the team for their draw in Norway last Wednesday but has since engineered two emphatic wins and a clear path to automatic qualification.