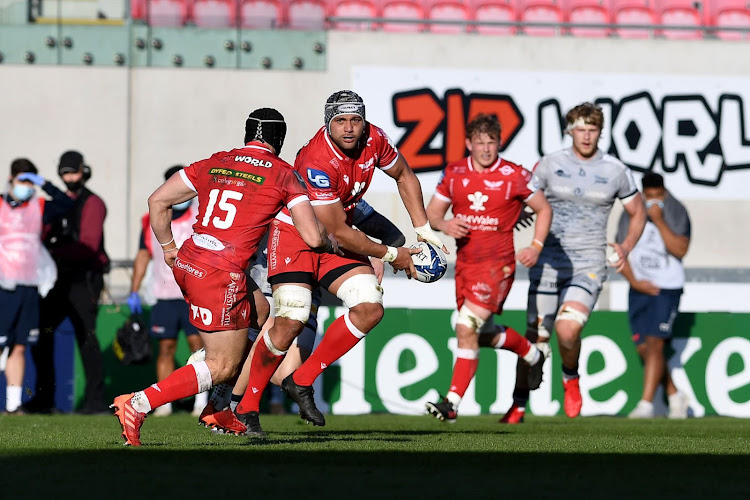 RED ALERT: Sione Kalamafoni of Scarlets in action during the Heineken Champions Cup Round of 16 match against Sale Sharks at Parc y Scarlets in Llanelli, Wales, on April 4
Image: ATHENA PICTURES/GETTY IMAGES

The Guinness PRO14 Rainbow Cup begins this weekend and despite a late change in format, there are some exciting fixtures to look forward to in the inaugural competition.

Four SA clubs had been due to form part of a 16-team format but are unable to travel to the UK and Ireland due to the Covid-19 pandemic.

Instead, there will be dual tournaments with no cross-hemisphere fixtures.

There are three matches on Saturday with Benetton welcoming Glasgow Warriors to Treviso while Ospreys and Cardiff Blues clash in Swansea, before a repeat of the Guinness PRO14 final when Leinster and Munster collide at the RDS Arena.

Dragons and Scarlets meet at Rodney Parade on Sunday to close out the opening round.

Three innovative law variations have also been approved by World Rugby for use in the Rainbow Cup — red card replacements, captain’s challenge and goal-line dropouts.

Glasgow kick off their Guinness PRO14 Rainbow Cup campaign with a trip to Benetton, the team they beat 46-25 in their final match four weeks ago.

Scotland scrumhalf George Horne streaked away to seal the crucial bonus-point win in the second half, which ensured the Warriors finished fourth in Conference A.

The Scots have lost just one of their last 14 contests against Benetton since 2011, and have won on their previous four visits to Italy.

Benetton lost all 16 of their PRO14 matches and a couple of wins against Stade Francais and Agen in the European Challenge Cup represent their only victories this season.

An all-Welsh battle takes place in Swansea on Saturday when Cardiff will be looking to avenge their 17-3 defeat by the Ospreys on New Year’s Day.

The Blues played with 14 men for 30 minutes, having received three yellow cards, so Dai Young will be banging on the discipline drum ahead of the game at the Liberty Stadium.

Ospreys have won four of the last half a dozen meetings against Cardiff and six of the previous seven have been settled by single-digit margins of victory, so a close game could be in prospect.

Toby Booth’s side signed off their PRO14 campaign with a sensational 24-19 comeback win at eventual champions Leinster in March, which guaranteed third spot in Conference A.

Less than a month after Leinster lifted the Guinness PRO14 title with a 16-6 win over Munster, the two Irish provinces meet again.

Leinster, who travel to La Rochelle in the Heineken Champions Cup semifinals on May 2, made it four successive league victories as they came out on top against Munster for a sixth time on the trot.

Munster’s six-game winning run in the Guinness PRO14 was ended with that defeat and their last victory against Leinster came in December 2018 at Thomond Park.

The champions have also lost just one of their previous 14 fixtures against fellow Irish provinces.

The final match of the opening weekend will have the Dragons and Scarlets clash for the second time in 2021, having gone up against each other on New Year’s Day when Scarlets came out on top 20-3 at Parc y Scarlets.

Two second-half tries from No 8 Sione Kalamafoni and replacement outside-half Sam Costelow were enough to get Glenn Delaney's side over the line.

Dan Jones and Costelow also kicked 10 points between them, while all the Dragons could muster was three points from the boot of Josh Lewis.

Scarlets were 41-20 winners on their last trip to Rodney Parade in August, while Dragons have lost their last five PRO14 matches at this venue. — PRO14 media