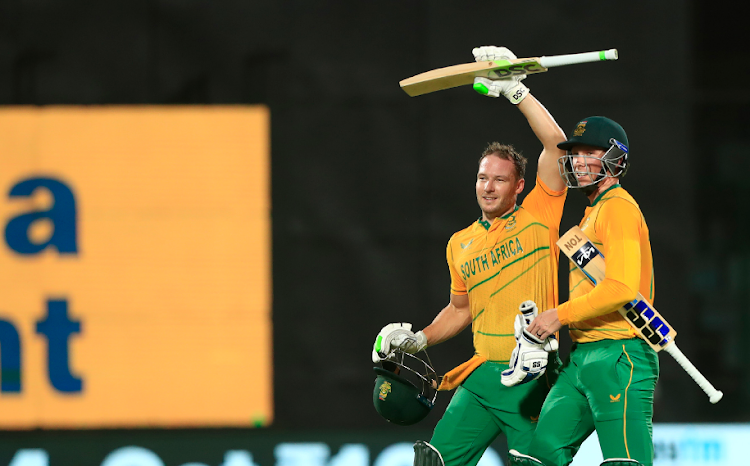 SA batters David Miller and Rassie van der Dussen celebrate after winning the 1st T20 match against India at the Arun Jaitley Stadium in Delhi, India on Thursday.
Image: Pankaj Nangia/Gallo Images
Rassie van der Dussen and David Miller combined for an unbeaten and delightful partnership of 131 off 64 to help SA to a seven-wicket win over India in the first T20 match at the Arun Jaitley Stadium in Delhi on Thursday.

Miller, who scored 481 runs in 16 matches to help the Gujarat Titans to their maiden IPL title, continued with his rich vein of form and was superbly supported by Van der Dussen, who took time to get going.

Miller made a solid contribution of 64 off 31 while Van Der Dussen, who was dropped on 30 by Shreyas Iyer, added 75 off 46 as they helped the Proteas cross the line in their highest successful T20 run chase.

The other notable contributors with the bat for SA were Quinton de Kock (22) and all-rounder Dwaine Pretorius (29) as they made it difficult for the Indian bowlers at the fast scoring ground.

Bhuvneshwar Kumar, Harshal Patel and Axar Patel were the only successful bowlers with a wicket apiece and their efforts were not enough as the Proteas took a 1-0 lead in the five-match series.

SA captain Temba Bavuma won the toss and opted to field and they managed to restrict India to 211/4 after 20 overs with Keshav Maharaj, Anrich Nortjé, Wayne Parnell and Dwaine Pretorius returning with a wicket apiece.

With the bat, Ishan Kishan led the way for India with a delightful knock of 76 off 48 while other notable contributors were Shreyas Iyer (36), Pant (29) and Ruturaj Gaikwad (23).

In reply, it was the belligerent partnership of Miller and Van der Dussen that saw SA end India's 12-match winning streak in the format with an impressive victory that was achieved with five balls to spare.

The 21-year-old right-handed middle order batter Tristan Stubbs made his T20 debut for the Proteas.

Stubbs started because Aiden Markram tested positive for Covid-19 in the team’s last round of testing on Wednesday. The SA team management said he has begun the quarantine protocol.

The match also saw all-rounder Wayne Parnell make his first T20 appearance since 2017 and Anrich Nortjé returning to the Proteas for the first time since the ICC T20 World Cup late last year in the United Arab Emirates (UAE).

For India, it was the first match for Rishabh Pant as captain at his home ground after he took over from injured KL Rahul. Hardik Pandya and Dinesh Karthik both returned to the side after impressing in the IPL.

The second match moves to Cuttack on Sunday where SA will be looking to make it 2-0.