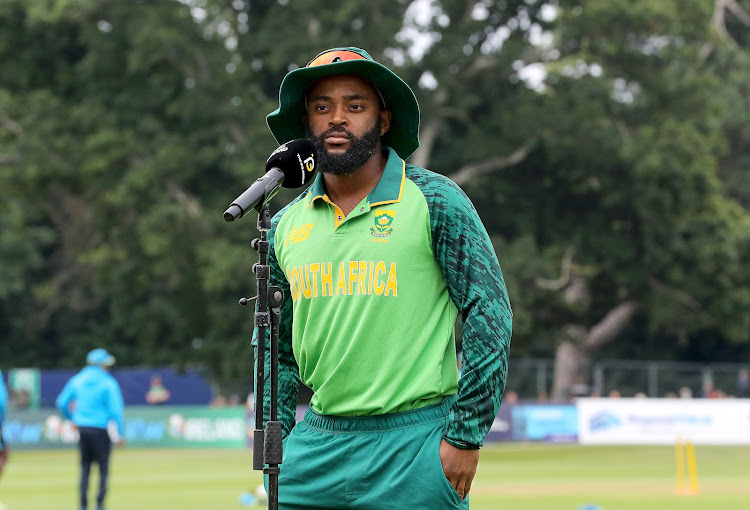 Proteas limited-overs captain Temba Bavuma says they must improve in their next World Cup match against the West Indies on Tuesday.
Image: eane/INPHO/Shutterstock

Proteas captain Temba Bavuma has admitted they were taken aback by the shock decision of Quinton de Kock to withdraw from the side that beat the West Indies on Tuesday after team members were ordered to take the knee in support of the Black Lives Matter movement.

As a result of De Kock’s decision, the Cricket SA (CSA) board on Tuesday afternoon said it will wait for a report from the Proteas team management before deciding on the next step.

The last minute decision did not have a negative impact on the Proteas as they went on to pull off a convincing eight wickets ICC T20 World Cup victory over the struggling West Indies to refresh their chances of qualifying for the semi-finals.

“As a team we were obviously surprised and taken aback by the news. Quinton is a big player for the team, and not just with the bat but the role he plays from a senior and experienced point of view.

“Not having that at my disposal as the captain is something I was not looking forward to, but Quinton is an adult, he is a man in his own shoes and we respect his decision and his convictions.

“I know he will be standing behind whatever decision he has taken. From a team’s point of view, unfortunately we had to get the job done because there was a game of cricket to be played for our country.

“It was important that as much as everything was happening, we find a way to get the right space and take it home for our country.”

There are suggestions in certain sections of the public that De Kock be removed from the World Cup roster in the United Arab Emirates (UAE).

Bavuma said that is not his decision.

“I don’t know how far it is going to develop. The decision he took was today. It wouldn’t be my decision whether to replace him and get a substitute. That will probably be the coach and the selectors.

“As far as we stand, Quinton is one of the players, he is still one of the boys, so whatever support he needs and whatever shoulder he requires as teammates, we will be there for him.

“If there is a need for further conversations to be had, I am sure those will happen among the guys.”

Bavuma said it was not ideal that players were told on the morning of the crucial game that team members would have to take the knee.

“The instruction from the board came through this morning. A meeting was convened between a few members and that’s where that message was passed to us.

“Before getting on the bus to travel to Dubai, the message was passed to the players. The trip was for about an hour to two and during that trip I guess that’s when Quinton made his decision. I found out as the captain when I got to the changing room.

“It was probably not ideal but, as players, whether the instruction came in the morning or last night, we were going to deal with it at some stage anyway, but definitely it was not ideal.

"The good thing is that we were able to find a way, get on the field and represent our country as well as we did,” concluded Bavuma, who said De Kock has not explained the reasons for his decision.