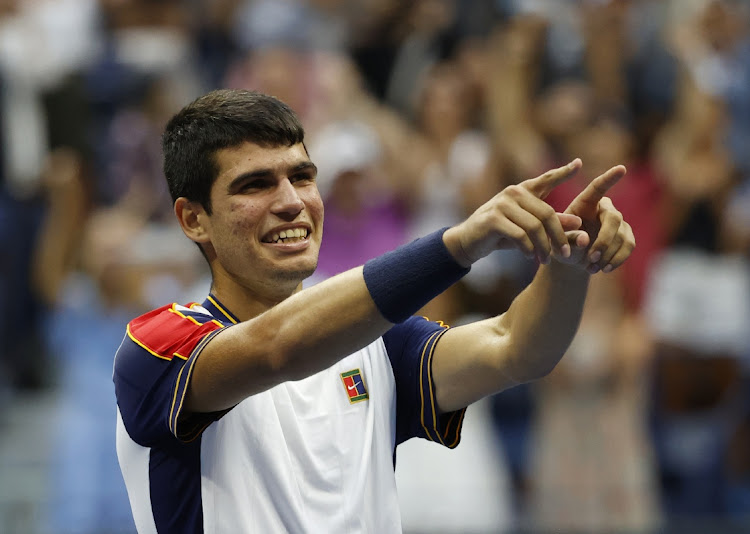 Carlos Alcaraz became the youngest player in the Open era to reach the quarter-finals of the men's tournament at Flushing Meadows after the 18-year-old Spaniard beat Germany's Peter Gojowczyk 5-7 6-1 5-7 6-2 6-0 on Sunday.

Alcaraz, who is 18 years and four months old, is eight days younger than Andre Agassi when the American reached the 1988 US Open quarter-finals and semi-finals, according to US Open stats.

The Spaniard is also the youngest to reach this stage in New York since Brazilian Thomaz Koch in 1963, five years before the sport turned professional, when the tournament was known as the US Championships.

"It's really tough to play these kind of matches, to play fifth sets," Alcaraz told reporters.

Gojowczyk, 14 years older than Alcaraz and playing in the fourth round of a major for the first time, made a bright start to edge the first set, but was hampered by an injury to his thigh and took a medical timeout midway through the fourth.

The German fought hard but faded badly as the match wore on, labouring behind the baseline as Alcaraz closed out the match with a bagel in the decider, sealing victory in three hours, 31 minutes when Gojowczyk sent a forehand sailing long.

Alcaraz smashed 35 winners and seven aces while winning 15 points at the net, feeding off the energy of the vocal crowd on Grandstand, while his opponent ended the match with a whopping 84 unforced errors.

"In the first sets I thought that I reached my limit physically and mentally. I think the crowd was really, really important for me in this situation," Alcaraz added.

"I felt the energy of the crowd pushing me up... without the crowd, it couldn't be possible to be here."

Next up for the Spaniard is 12th-seeded Canadian Felix Auger-Aliassime, who dispatched American Frances Tiafoe 4-6 6-2 7-6(6) 6-4.

After rolling through the opening two sets, the 25-year-old Dutchman had looked poised for smooth passage into the last eight but in the end needed five sets, five match points and four hours and 20 minutes to tame the 11th seed.

Van de Zandschulp, 117 in the world rankings, becomes just the third qualifier to reach the US Open men's quarter-finals but could soon have company with German qualifiers Peter Gojowczyk and Oscar Otte looking to join him.

Daniil Medvedev fired off 13 aces to end British hope Dan Evans' challenge with a quickfire 6-3 6-4 6-3 victory in the fourth round on Sunday.

Evans had survived a fifth set tiebreak against Alexei Popyrin to reach the last 16 but on day seven of the hardcourt major, he was no match for the Russian second seed.