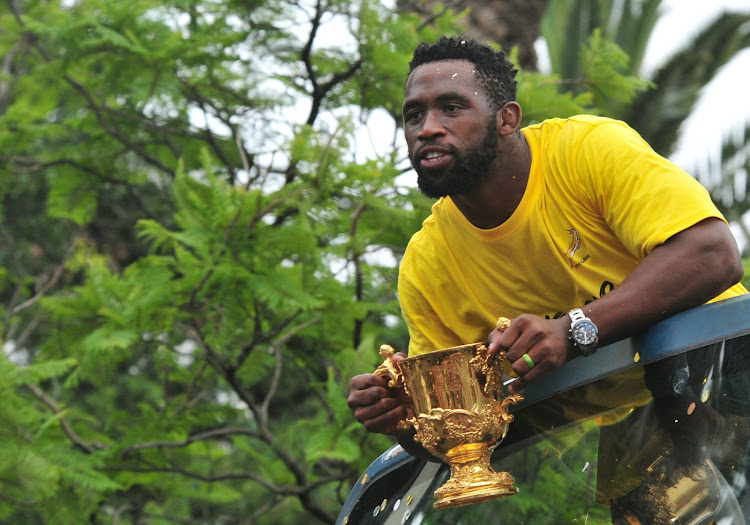 IN FLUX: Springbok captain Siya Kolisi with the coveted World Cup trophy his team won in 2019. The coronavirus has had a huge impact on rugby and other global sports
Image: GRANT PITCHER/GALLO IMAGES

With global rugby in a state of inertia because of the Covid-19 pandemic, November’s draw for the 2023 World Cup may have to be postponed.

Now that rugby has been put on hold, teams will not have the opportunity to improve their rankings and their prospects for a better seeding at the draw.

A poor ranking at the time of the draw is likely to result in a “pool of death”.

The Springboks are top of the rankings, and a decision has yet to made on whether their incoming tour matches against Scotland and Georgia in July will be played.

If rugby gets the green light for resumption, the Boks will be in action against Georgia at the Nelson Mandela Bay Stadium on July 18.

Before that game the Boks are set to face Scotland in Cape Town on July 4 and in Durban on July 11.

The failure to finish the Six Nations tournament means a team like Wales are now sixth in the world rankings and uncertain of their future.

Wales’s summer tour to Japan and New Zealand, scheduled for June, is also in doubt after the game was shut down.

At present the draw for the 2023 Rugby World Cup will take place in November, and the rankings on November 22 will be used to determine the seedings.

Wales are one of 12 teams that have already qualified for the next instalment of the global gathering thanks to their placing in the 2019 World Cup pool stage.

Because of Covid-19, opportunities for teams to rise up the rankings could be limited.

Wales are then due to play Fiji, New Zealand and Argentina in the autumn internationals prior to the World Cup draw, with a game against SA to follow.

The seeding system from previous Rugby World Cups will be retained with the 12 automatic qualifiers from 2019 being allocated to their respective bands based on their World Rugby Rankings on the day of the draw:

Band 2: The next four highest-ranked teams

The remaining two bands were made up of the eight qualifying teams, with allocation to each band being based on the previous Rugby World Cup playing strength: