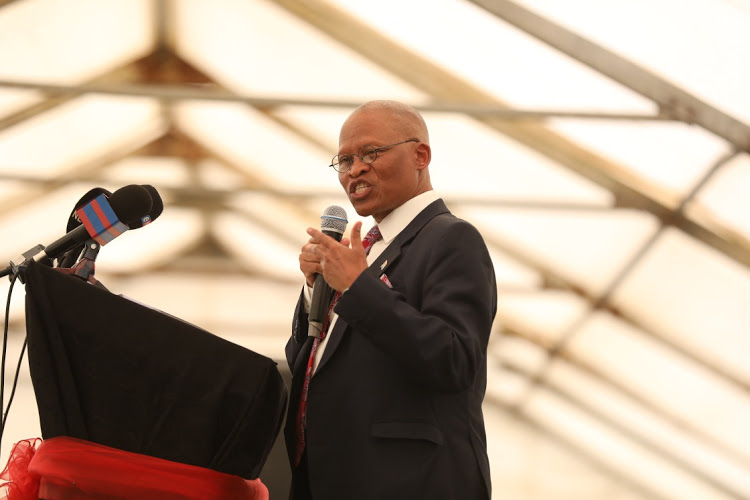 Chief justice Mogoeng Mogoeng will appeal against a decision by the Judicial Conduct Committee (JCC) which ordered him to apologise for, and retract, pro-Israel comments he made during a webinar in June last year.

“The chief justice ... has signified his intention to appeal the decision ... The JCC will in due course determine the date on which the appeal would be heard by at least three of its members,” the JCC said in a statement on Sunday.

This after the JCC found Mogoeng guilty and ordered him to apologise unconditionally for becoming involved in political controversy through his utterances in the online seminar hosted by The Jerusalem Post on June 23 2020.

The committee further ordered Mogoeng to unreservedly retract and withdraw a statement he uttered after a public outcry over his initial comments.

The Sunday Times reported in June last year that, in his webinar comments, Mogoeng seemed to base his pro-Israel stance on passages from the Bible.

“The first verse I give is in Psalms 122, verse 6, which says: 'Pray for the peace of Jerusalem, they shall prosper that love thee,'" Mogoeng said.

“Also Genesis 12, verses 1 to 3, says to me as a Christian, if I curse Abraham and Israel, the Almighty God will curse me too.

“So, I am under an obligation as a Christian to love Israel, to pray for the peace of Jerusalem, which actually means the peace of Israel. I cannot, as a Christian, do anything other than love and pray for Israel because I know hatred for Israel by me and my nation can only attract unprecedented curses upon our nation,” the chief justice said.

“I think as a citizen of this country, we are denying ourselves a wonderful opportunity of being game-changers in the Israeli-Palestinian situation. We know what it means to be at loggerheads, to be a nation at war with itself.”

The JCC said it would in due course determine the date on which the appeal would be heard by at least three of its members.

Members of the JCC who are eligible to hear the appeal are deputy chief justice Raymond Zondo and justices D H Zondi, N Dambuza and M Victor.

The organisation #Africa4Palestine expressed its disappointment at Mogoeng's decision to appeal.

"We are confident that the appeals process wil result in the same conclusion - that the Chief Justice will have to retract and apologise for his pro-Israel and anti-Palestine comments...

"As previously indicated, #Africa4Palestine has formally written to the Chief Justice requesting a meeting. To date, the Chief Justice has neither acknowledged nor responded to this request of engagement, however, our offer to meet and dialogue remains open," it said in a statement.