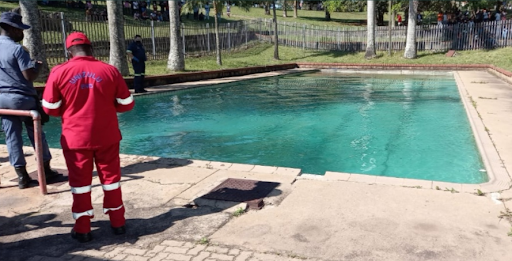 Police are probing the death of a University of Zululand student who drowned in a campus pool on Sunday
Image: SAPS via twitter

Police are conducting an inquest into the death of a University of Zululand student who drowned in a campus pool.

Police spokesperson Col Thembeka Mbele told TimesLIVE that Mtunzini police have opened an inquest docket into the death of the 21-year-old man who drowned around 12.30pm on Sunday.

“It is alleged that the deceased was swimming with his friends at the university swimming pool when he got into difficulties and drowned.

“The circumstances surrounding the incident are being investigated,” said Mbele.

The university's student services department released a communique on Monday to inform students about the incident.

It said the exact circumstances surrounding the student's death were still not clear but the university had ascertained that he could not tread water to keep afloat, which resulted in him drowning.

“The Unizulu management is deeply saddened by this tragic loss of a student who was performing very well in his studies.

“The university is further aware of the emotional trauma that students were exposed to,” the communique stated.

Nkosinathi Sibiya of the SA Students Congress (Sasco) at the university said: “I will not be in a position to say much pertaining the matter since I believe we must give the institution and the family time to deal with the case.”

“But further to that we must also plead with students to refrain from using the pool as it continues to pose a threat to the lives of students.

“As an immediate solution the institution should drain the pool because, as it is summer, there are many temptations to use the pool from the students and members of the community as well.

“Further to that, the institution must provide a protective layer to the pool and keep it covered at all times ... ” said Sibiya.