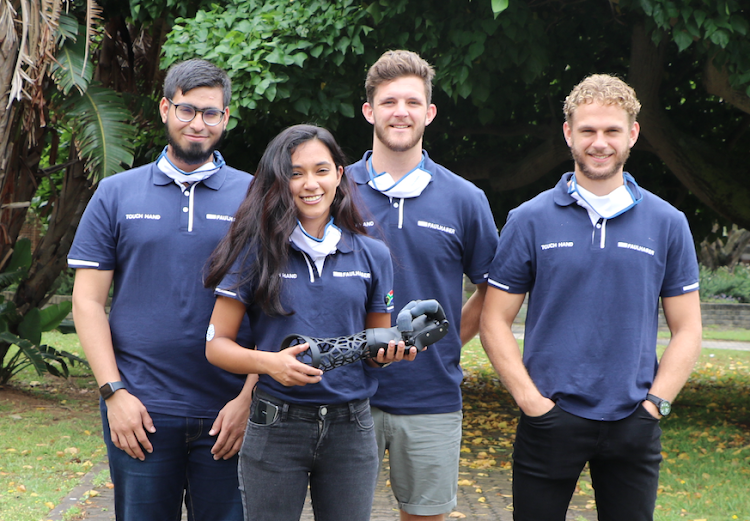 A group of Nelson Mandela University engineering students and academics and their University of KwaZulu-Natal counterparts have built a robotic prosthetic to help amputees perform day-to-day functions.

The group presented the invention at the 2020 Global Cybathlon hosted by Switzerland virtually last weekend.

The members of the Touch Hand team were the only participants from Africa.

In the multi-sport event, people with physical disabilities competed against each other to complete everyday tasks using state-of-the-art technical assistance systems.

Reading electromyography (EMG) signals from a person’s arm muscles, the battery-operated prosthesis is able to imitate natural hand function, allowing the user to pick up and place items of various size and practise hand grips.

At the cybathlon, the team performed 24 predetermined tasks across six stations using the Touch Hand-Socket prosthetic, against competing teams from other countries.

They partnered with UKZN professor Riaan Stopforth and other contributors.

Varghese said: “The competition was quite tough because teams had to perform a lot of task in different stations.

“It’s something that would be hard even for someone with a functioning [natural] hand but we’re very happy with our performance, especially because we were competing against international teams who are mostly in the private sector.”

The team finished 11th out of 13 competitors in their section.

They developed and tested the limb on Port Elizabeth’s Lungile Dick, who lost his hand in an accident and consulted with Livingstone Hospital’s Dr Bryan Theunissen.

Dick competed in the cybathlon using the prosthetic hand.

Varghese said the device was designed in a way that allowed it to pick up signals from Dick’s forearm and perform functions under his guidance.

He is able to close the prosthetic hand into a fist, open it or move just the fingers.

“One of the most important things from the competition is that we were able to identify where we can improve.

“What we did notice is that simpler prosthetic with less motors actually performed better and faster.

“Also, a lot of prosthetics in the competition were smaller than ours and were able to perform some of the finer tasks better than ours,” she said.

Dick is able to attach the prosthesis to his forearm where his natural hand would start.

It is attached to a 3D printed socket that covers and keeps his forearm stable.

One of the primary aims was to create a safe, light prosthesis that is easy to use and walk around with.

Many amputees struggle to use existing prostheses because they are heavy.

The prosthesis is not waterproof.

Theunissen said many upper-limb amputees tended to abandon their prostheses because of poor functionality.

“Upper-limb amputees are presently not well served at all.

“They either get really old 1970s technology or a cosmetic form that does not necessarily perform any function.

“There is also a more strong focus on lower-limb prosthetics because it’s usually found that a lot of upper-limb amputees don’t use their prostheses because they’re not particularly functional.”

The team partnered with Rapid3D to achieve their desired design of the 3D printed socket.

Rapid3D’s Lynton Dent said: “As an industry partner, we’re looking to localise the knowledge [of] technology and through linking with students and these projects we are achieving in terms [of] getting experts that can take this knowledge into industries and utilising it.”