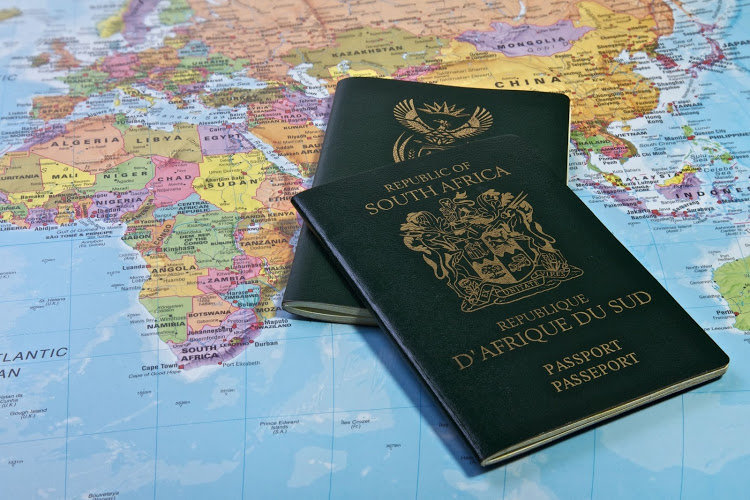 The South African passport has slipped from 53rd place to 56th in a year — and by 21 places since its best ranking in 2007/2008 — in the latest Henley Passport Index.

The index is a ranking of all the world’s passports according to the number of destinations their holders can access without a prior visa‚ based on data from the International Air Transport Association (Iata) and research by Henley.

The ranking puts SA alongside Belize‚ just ahead of Kuwait and East Timor.

Internationally‚ the UK and US are less open than before while Asia’s passport power dominates.

SA’s tourism industry has long been lobbying for improved ease of access for visitors to the country‚ and the government has stated it has a target of enticing more than 21-million international visitors by 2030.

In November‚ tourism minister Mmamoloko Kubayi-Ngubane welcomed the scrapping of unabridged birth certificates for international minors travelling to SA with their parents.

“To completely rescind this requirement is a win for tourism and an upside for industry and travellers alike as this has been a real concern raised throughout my engagements with various stakeholders‚” she said.

The corruption scandals plaguing SA may also be hurting its reputation abroad.

The Henley report noted that despite the economic benefits that open borders bring‚ visa waivers can also pose a potential threat for the host country‚ as they undercut the host government’s ability to vet visitors through background checks.

“As such‚ countries with strong domestic institutions and political stability are able to sign more visa waiver agreements.”

New Zealand and Singapore hold the top spots in terms of government integrity‚ followed by northern European countries and the UK.

For the third consecutive year‚ Japan secured the top spot on the index‚ with a visa-free/visa-on-arrival score of 191.

Singapore holds on to its second place with a score of 190‚ while South Korea drops down a rank to third alongside Germany‚ giving their passport holders visa-free/visa-on-arrival access to 189 destinations worldwide.

Globally‚ states affected by ongoing conflict or unrest have experienced heavy losses in the score over the past decade.

Afghanistan remains at the bottom of the travel freedom spectrum‚ with its nationals only able to visit a mere 26 destinations visa-free.

Countries with citizenship-by-investment programmes continue to consolidate their positions on the index.

Malta sits in ninth  place‚ with access to 183 destinations around the world‚ while Montenegro holds on to 46th place‚ with a visa-free/visa-on-arrival score of 124.

In the Caribbean‚ St Kitts and Nevis‚ and Antigua and Barbuda secure 27th and 30th spot‚ respectively.